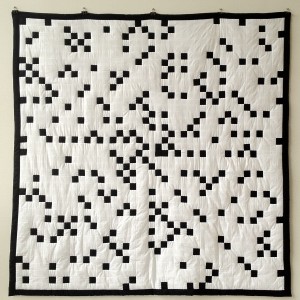 More than other fiber arts, quilting depends on understanding the geometry of how the pieces of a quilt will fit together in complex ways. That is to say, it’s math! Justin, my husband (then boyfriend) told me about the Ulam spiral and I thought it’d be a pretty cool subject for a quilt for this reason. Doubly so since the Ulam spiral is also known as the “Ulam cloth”!

(In case you’re not familiar with it, and don’t feel like clicking through, the Ulam spiral is a grid where each square represents an integer, starting with 1 at the center and moving out in a spiral pattern. When the number is prime, the square is black; when it’s not, the square is white.)

I started by constructing a map of the quilt on graph paper. I chose a 41 x 41 grid for the following reasons:

Had Justin known how to code at the time, he probably could have generated this graph for me. Oh well. I ended up coloring in all of the prime numbers from 2 to 1,681 by hand. Yes, really. The paper just needed to be big enough for me to see the squares.

Next, I divided the 41 x 41 grid into 4 roughly equal quadrants. Here’s where I was able to save myself some time. With the exception of 2 and 3 (2 being the only even prime number), every 2 adjacent squares on the Ulam spiral are either white and white (two composite numbers), or black and white (one prime and one composite). This is a weird property of the spiral; you can check for yourself here.

The Ulam spiral actually shares this property with a specific, common type of quilt called an Irish chain quilt. If you look at any Irish chain quilt, you’ll see that no two squares of the same color touch each other. Irish chain quilts are made using strips of fabric that are sewn together, and then cut up, and I could do that here:

In addition to saving time, the Irish chain quilt method has the advantage of being much more precise since you don’t have to measure and cut each individual square.

So at this point I had one strip of black + white, and another strip of white +  white. I cut these strips into 4” x 2” rectangles (3.5” by 2” if you count the seam allowance used up on each side). Using the graph I had made, I started in the upper-left-hand corner and paired up these rectangles to create squares (two strip pieces sewn together vertically).

Then, I sewed the foursquares together and so on until I had done an entire quadrant. I didn’t have any special method to avoid errors, but after a few years nobody’s found any mistakes yet!