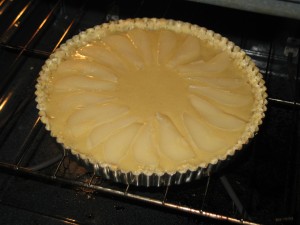 [caption id="attachment_942" align="alignleft" width="300" caption="The frangipane tart (I don't talk about this until the end of this post, be patient!) before baking..."][/caption] 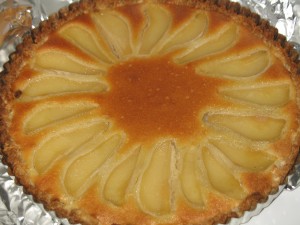 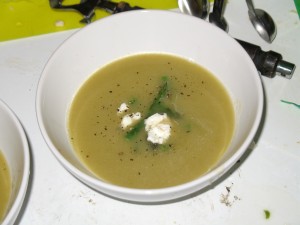 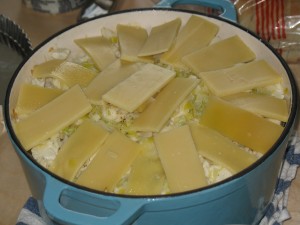 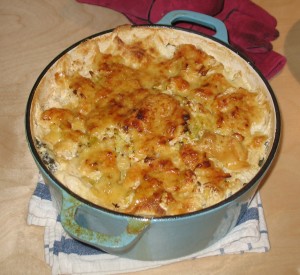 I read this recipe quite a long time ago, and while the recipe itself sounded interesting, what made me really want to make it was the possibilities.

The link is to a recipe for panade, which is somewhat similar in concept to a trifle, except made with stale bread, vegetables, and cream. There’s a little bit of prep that goes on, but essentially you layer a bunch of vegetables and bread in a dutch oven, bathe it in cream and chicken stock, and bake it for a while. This one has cauliflower, kale (I used collard greens), and cauliflower.

Oh yeah, then you top it with cheese, and bake some more.

By my standards, this recipe is relatively healthy - yes, it includes cheese and cream, but other than that it’s just vegetables. I kind of consider good cheese a health food, though. I acknowledge that this would probably be a controversial view in the evidence-based nutrition community.

Also, as I mentioned above, think of the possibilities! You could maybe do this with beets and spinach, and rye… or some kind of black bread.

I needed a vegetable-oriented first course to along with the panade. This asparagus soup has been on my list for about a year. The asparagus soup _is _actually healthy, since it’s basically puréed and strained asparagus, together with some chicken stock. I didn’t like this as much as many of my other soups - the flavor of the asparagus doesn’t seem to quite stand up to the flavor of the stock. Also, part of the appeal of asparagus is its crispness and woodiness, which you lose by making it into a soup.

Lastly, and this was the best part, I had a bunch of extra almonds, so I decided to make this wonderful pear-frangipane tart. Wow, this was good. Frangipane in this case is basically an almond paste made with butter and sugar. Very similar, if not the same as, marzipan. It’s incredibly sweet, which I’m normally sensitive to, but something about the almond flavor cuts through this nicely.

We made it from scratch, which involved boiling the almonds for thirty seconds and immediately cooling them down (“blanching”), then peeling the skins off. Blanching’s a useful technique. It makes it easy (possible?) to peel almonds, and lots of other things too, like tomatoes. It also helps “fix” the color of certain vegetables.

Anyway, after being blanched, the almonds are ground up with butter and sugar. You pour the resulting paste into a pie crust, layer some pear slices on top, and bake. The frangipane becomes a beautiful golden-brown color and firms up nicely.