Avocado soup, lamb and figs, and a rice fiasco 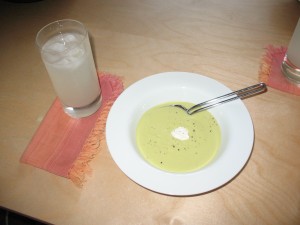 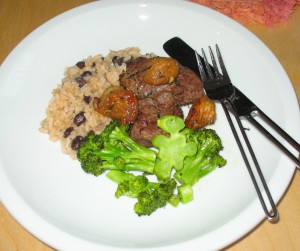 Now that I actually have a schedule during the day (and a busy one at that), I try to do 2 cooks during the week. A “big cook” on the weekend where I do 3 courses, and a “small cook” during the week where I just make a main dish.

For big cook this week, I put together this avocado soup, and this roasted lamb and fig recipe, together with some roasted broccoli and rice and beans.

Soup is an interesting thing to make. The balance of flavors keeps changing, and so the soup must be tasted constantly as it cooks to make sure everything is in balance. With this soup, I tried to maintain the proportion of its main flavors (chicken broth, avocado, lime and pepper) so that nothing would overwhelm anything else. In general, when I am making soup, I don’t pay close attention to the recipe; I’m not sure that’s even possible.

I will note that ginger is also supposed to be a part of soup, but ginger doesn’t survive much cooking, and so I let it burn off rather than trying to keep adding more. I will probably fix this the next time around. Also, though the soup seemed quite smooth after I pureed it, I took Thomas Keller’s advice - “when in doubt, strain”. This was a smart move, since a fair amount of fibrous matter stayed in the strainer; straining may qualify as one of my kitchen secrets. Finally, as the soup aged in the fridge the lime component actually got stronger; this was an interesting side-effect.

The main was fairly straightforward - roasted filets of lamb. I bought some strange hunk of lamb from Trader Joe’s (I can’t remember what it was now) that was trussed up like a chicken. It was really cheap, and yielded seven filets! However, it took me about a half hour to get it broken down. Also, the recipe calls for a rack of lamb. Since meat with a bone in it apparently cooks much more slowly than boneless meat, I ended up overdoing the lamb fairly significantly. Still good, but seeing all the finished lamb sitting in pools of juicy goodness - which should have remained in the meat - broke my heart.

For dessert, I attempted to make this rice pudding. It was a complete and total disaster, approaching the _tarte tatin _incident of 2009, about which more later. I’m not sure why, but the rice simply would not absorb any liquid. I tried letting it go for a fairly long time (about 45 minutes), by which time it actually burned, forming a thick layer of charred rice along the bottom of the pan I was using. Hm.