A few months ago, I made this banana pudding recipe, which claims to be that of the Magnolia Bakery, and does indeed taste very similar. 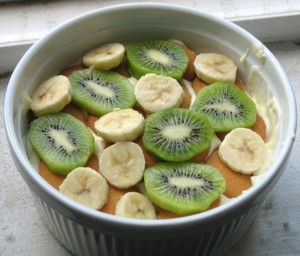 [caption id="attachment_628" align="alignleft" width="300" caption="Just before the final layer of pudding is added."][/caption]

More recently I thought, why not try using this method with some other types of fruit? Provided the fruit is somewhat ripe, pretty much anything should work.

So, I tried substituting kiwis for half the bananas. I also added some lime zest in the pudding itself. The result came out very well, and was a different sort of experience.

One mistake I made was not planning in advance - as a result, I used ripe, but not very ripe, bananas or kiwis. Ripeness helps because the fruit disintegrates somewhat and its flavor spreads more thoroughly throughout the rest of the pudding.

I’ll try this again at some point keeping that in mind. I’ll also try this with some other fruit, such as strawberries.