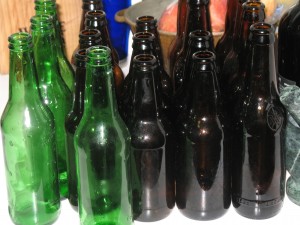 I wrote my last beer post having just finished bottling a new batch of beer.

After bottling, I waited a few more weeks for sediment in the beer to settle, and for the bacteria in the beer to convert the priming sugar (which I added just before bottling) into carbon dioxide.

Then - it was time to try it out! I’m not sure what to make of the results.

Overall, this was another good learning batch, but I apparently have a way to go before I produce beer with real culinary value. The fact that there were problems with carbonation level and alcohol content - and the fact that the alcohol content seemed to change as the beer aged - suggests to me that I need to develop a better understanding of the fermentation process and wait longer, in general, before bottling.

I also would like to learn how to use a hydrometer, which would give me information about the progress of fermentation, and alcohol content. As things stand now, I tend to just follow the instructions, whereas it is far more reliable to let actual measurements guide any process like this.

Finally, I am going to look into small batch brewing, and whether this is even possible. Rather than spend hours on brewing a massive batch once a year, it would be great if I could brew a batch of 4 - 6 bottles every month or so, to perfect my technique.