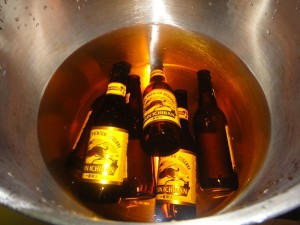 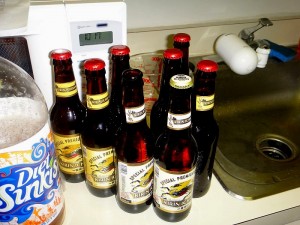 _Note: This is a followup to this entry. _

Shortly after arriving in Philadelphia, I decided to try brewing another batch of beer with a friend of mine. This time, to save on materials and on wasted beer (yes, it happens), we decided to brew a half-batch.

Brewing in Philadelphia gave us a chance to take advantage of Philly’s awesome homebrew beer scene. The people at Home Sweet Homebrew (see also later entry) have always been incredibly helpful, so we went by there to get the ingredients. They apparently don’t like the homebrew “kits” you can get on e.g. Amazon, like say this one, so they sold us the malt extract as well as hops to be used for flavor as well as aroma. Part of making beer is boiling the wort with the hops in it, which brings the flavor and aroma out. Boiling them for longer increases hoppy flavor, since this is provided by resins that take a long time to extract, boiling them for a shorter time increases_ aroma_, since this is provided by oils that evaporate quickly. Anyway, we added “flavoring hops” at the beginning, and then “aroma hops” at the end of the boil.

I’m a slow learner, so despite this being my third time out, I had to consult the instructions a lot. I haven’t found any quality homebrew instructions by the way - many instruction sets contain confusing, or even contradictory, instructions, which is painful for inexperienced brewers. I attribute this to the inability of most instruction writers to understand a novice’s perspective - they take a lot of knowledge for granted, for example, or give instructions that can be interpreted several ways unless you already know how things should be done. I’m working on solving this problem with some other projects I’m working on, too; it’s an important step to helping people try new things.

Though I am finally beginning to develop a more intuitive sense of how the brewing process works, we still brewed somewhat haphazardly and I think this led to a relatively poor final outcome. As one example, I didn’t realize that all the homebrew shops in Philly are closed on Monday, which was our bottling day. So I ended up having to buy beer (Kirin was the cheapest, sadly) so that we could use the bottles. OK, fine. But we were also out of decent bottlecaps; many had rusted. We tried to use only ones that were clean, and of course sanitized them, but I have no idea if that may have been a factor.

Also, we still didn’t have a good grasp on how important the timing of the various beer stages is (e.g. how many days do you have to / can you wait before bottling?), which again may have caused problems.

On the plus side, I finally learned how to use a hydrometer.