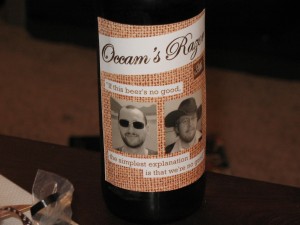 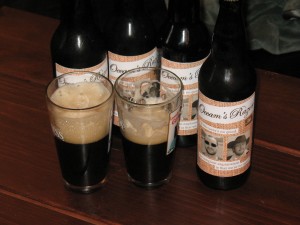 Having met with little success in our last homebrewing attempt, my friend David and I tried again, with the goal of having something ready in time for a Wharton homebrewing competition. This time we made several significant changes:

I also noticed a general increase in the level of confidence and understanding of what we were doing - we probably spent only about half the time on this batch. Can any instructions, no matter how good, compensate for developing an intuitive understanding or “feel” for what you are doing?

Though we didn’t win any awards, the beer came out well enough this time that it is actually a pleasure to drink! I also made some snazzy labels to go along with it; we named this batch “Occam’s Razor”, on the basis that if the beer is bad, there are many explanations we could offer but the simplest is that we are incompetent. I made some Guinness-flavored (and also philosophy-themed) marshmallows to go along with the beer, too, which I’ll write an entry about later.

For our next beer, we are considering Nietzsche’s Abyss Stout: “As black as the soul of man.”