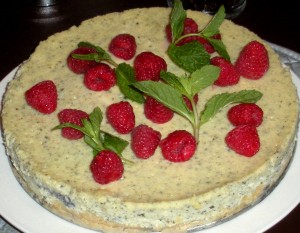 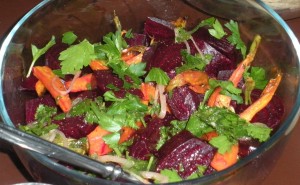 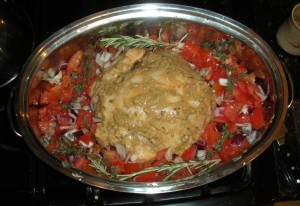 [caption id="attachment_969" align="alignleft" width="300" caption="Before... you can see the chicken in the center, coated with a honey-mustard mixture and surrounded by tomato, red onion, and rosemary and thyme"][/caption] 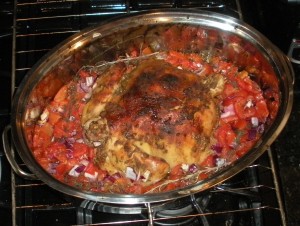 Between exams, other projects, and travel I hadn’t really been in a kitchen for a little while. So I decided to cook something, even though I’m away from home at the moment (in Portland).

Other people’s kitchens make me a little nervous - I can’t count on things that I need being available when I need them. So I decided to make some dishes that I could make without too many special implements. This meant a beet and carrot salad, roast chicken with tomatoes and onions, and a cheesecake.

I decided to go with this green tea cheesecake since I was also looking for an excuse to go to a nearby location of the amazing Asian supermarket Uwajimaya. I freaking love Uwajimaya. If I lived in Portland, it’s where I would shop even though it’s about an hour of extra travel. They have incredible fresh seafood of all types, as well as lots of really interesting fruit - fresh rambutan, lotus root, and buddha’s hand, anyone? I was pretty close to making a last-minute decision to incorporate some of these ingredients in what I cooked, but given that Epicurious had only one recipe including dragonfruit, I decided to wait.

Anyway, so, cheesecake, chicken, and beet and carrot salad. The beet and carrot salad recipe was fairly intimidating, even though I really like roasting beets from scratch. I decided to dispense with most of the complexity of the recipe, particularly the idea of buying golden and red beets and making a separate dressing for each.

Instead, I bought only red beets and made one dressing for the whole thing, combining the ingredients of the dressings from the recipe. I used cumin, shallots, lemon juice, balsamic vinegar, and olive oil. I also decided to use a ton of parsley, since it was getting overshadowed by everything else, but lends a really nice fresh flavor to the salad. The recipe calls for leaving the tops of the carrots on while you roast them. This also looks pretty nice, but I’m not sure it was worth the trouble.

The chicken was fun - I’ve never roasted a whole one before. I started with this Easy Provencal Lamb recipe from the Barefoot Contessa, who’s usually pretty reliable. But when I got to the store, I found that bone-in lamb now costs $10 per pound. So for 7 pounds… yeah. A chicken that could feed everyone cost me 10% of that price. I removed the giblets - had never done that before, and they weren’t even bagged. This was less disturbing than I thought it would be. I then smothered the chicken in the honey-mustard sauce and put it in the roasting pan. The chicken gets surrounded by diced tomatoes and onions in oil and honey.

Interestingly, it turns out I put the chicken in the roasting pan upside-down. Apparently, people do this on purpose, because it helps keep the meat moist, especially in this case since the chicken was basically poaching in all the collected liquid from the tomatoes, onions, and sauce. So the chicken came out really well.

Uh, the second time, that is. As soon as we cut into it the first time, it turned out was still raw! How embarrassing. I had used the “juices run clear” test, which it turns out is not accurate. Instead, insert a meat thermometer in the thigh, and wait until the internal temperature reads 165 degrees. I promise your chicken will not dry out (well, it won’t dry out because you cooked it fully - I can’t guarantee it won’t dry out for other reasons). Once I cooked it through again, it was fine. Overall, I recommend 425 or 450 degrees for an hour or 90 minutes.

The cheesecake may have been the best part of the meal, and it was certainly the easiest. Cheesecakes are made from a simple batter which includes cream cheese, sugar, and eggs. In this case, we also added crushed-up green tea leaves, and some greek yogurt. These were both substitutes for the far more expensive ingredients that the recipe calls for: powdered green tea and fromage blanc. The green tea complements the savoriness of the cheesecake really nicely, as does the shortbread crust. All three of shortbread, green tea, and cheesecake straddle this savory / sweet line pretty well.