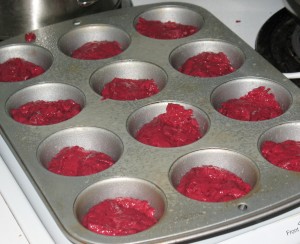 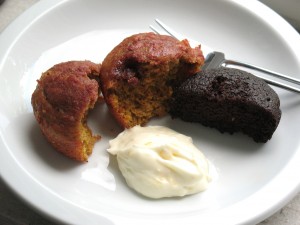 [caption id="attachment_703" align="alignleft" width="300" caption="Completed cakes (the one on the right is chocolate, left spice), with some buttercream frosting. Notice that the red color has basically disappeared."][/caption]

The chocolate beet cupcakes were good, although they also had a slightly strange earthy tang. I found myself liking the taste, not loving it, but not being able to stop eating them. Nobody could tell what the secret ingredient was.

But the beet spice cakes were the star. These were absolutely delicious. Again, nobody could tell what the secret ingredient was, although someone remarked that they tasted similar to carrot cake.

For a beet lover like myself, these were really fun to make. Even one of the test tasters, a self-professed beet hater, seemed to enjoy these, especially the spice cake. Interestingly, for some reason that probably has to do with the chemical properties of beets, they stayed incredibly moist and delicious for over a week!