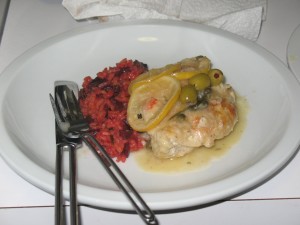 [caption id="attachment_323" align="alignleft" width="300" caption="This picture is to set the mood of this blog post."][/caption]

Though I wasn’t planning to cook for the week until this past Monday, on Sunday night I was watching Iron Chef. And I saw one of the chefs roast lemons. And I thought - wow, that sounds interesting. So I quickly looked up “roasted lemons” on Google, and this recipe was the first result.

And then I thought - I actually have capers and lemons already. So I’ll go get the other ingredients and give this a shot. And on the side, I’ll make a beet risotto, since I have some cans of beets that are probably never going to get used otherwise.

The chicken turned out surprisingly well, actually, it reminded me of a standard Italian lemon sauce, which I guess it sort of was. I’m not sure what roasting the lemons did for it, but perhaps it mellowed their flavor. I accidentally used 50% more lemon than I was supposed to, so it actually turned out to be a little too much, but overall not bad.

The beet risotto turned out OK, not great. I mean, it’s still beets, rice, and rosemary, which is a pretty good combination. But the beets had been soaking in water for quite a long time, and I’m sure it leeched out a lot of their flavor. As a result, they weren’t as beety as they normally would be. Perhaps sometime in the future I’ll try an experiment whereby I take the 5 cups of chicken stock I would normally use (for 2 cups of rice), and add the liquid from the beet cans, then reduce until we are back at 5 cups. I wonder if that would have helped in this case.

I also took time to roast the beets from the cans, by the way, which didn’t do anything. Good to know.