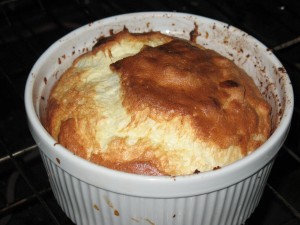 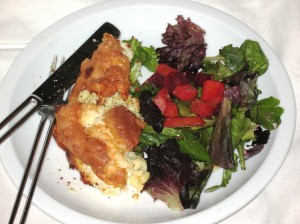 [caption id="attachment_698" align="alignleft" width="300" caption="The completed dish. The souffle kind of falls apart when you take a slice out, which is fine."][/caption]

Souffles are (a) vaguely mysterious, (b) apparently quite versatile, and © chemically interesting. So as soon as I saw Ina Garten make this blue cheese souffle, I wanted to try it.

Wikipedia says a soufflé is a “light, fluffy, baked cake made with egg yolks and beaten egg whites combined with various other ingredients and served as a savory main dish or sweetened as a dessert”. Sounds right. (For the curious, Wikipedia goes on to explain that “soufflé” essentially means “something puffed up” in French. Fair, right? Compare English “sufflate”, and indeed “inflate”.)

To make a souffle, you start by making a custard with your featured ingredient, which in this case was blue cheese. So blue cheese, egg yolks, milk, and some spices get mixed together, in a very specific way, with the yolks and cheese going in last. Then, you whip some egg whites into a meringue. Adding cream of tartar helps to stabilize the resulting foam (I will explain exactly how in a future post).

The meringue is folded into the custard. When the entire mixture goes into the oven, the ingredients are cooked, the foam hardens a bit, and the air trapped in the egg white foam increases dramatically in volume, resulting in a dish with a deliciously airy consistency.

For some reason, souffles have a reputation for being extremely temperamental (a common joke in cartoons is the souffle that falls in the oven at the slightest noise, a stereotype I certainly had in mind when I first thought of making one). But it just isn’t so. The souffle will settle a bit after a few minutes out of the oven, but by that time you’ve cut it up and put it on plates.

I served this souffle with a simple salad with red peppers. “Light” is probably not the right word for a meal whose main component is whole eggs, blue cheese, and milk, but it almost felt that way.

Update: Here are some rules for souffles that I picked up from this wonderful book by Herve This, p.183.