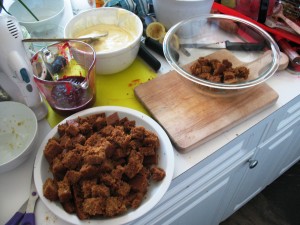 [caption id="attachment_868" align="alignleft" width="300" caption="Building the trifle. I have put down the first layer of gingerbread cubes in the bowl on the right, which will be covered with the lemon curd mixture and blackberry sauce on the left, then more gingerbread..."][/caption] 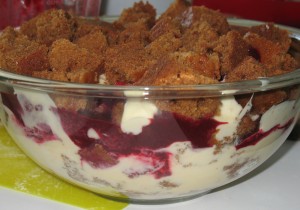 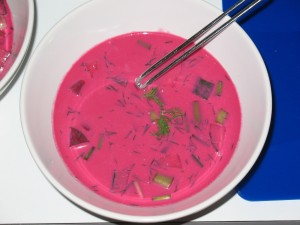 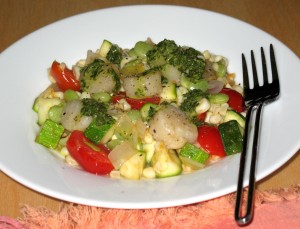 Very soon after having moved to Philadelphia, I made the following meal: borscht, scallops with succotash, and gingerbread trifle.

This was my first meal in a new kitchen, so I thought I’d go with something simple. Borscht is a delicious beet soup with the typical awesome magenta beet color, and it’s pretty easy to make. The only time-consuming thing is boiling the beets, which takes quite a while.

(On an unrelated sidenote, according to the Wikipedia article there are apparently other types of borscht that involve tomatoes or sorrel. Amazingly, sour cream, which is a typical borscht ingredient, reacts with the molecules in sorrel that cause a sour taste, neutralizing them.)

Succotash is a mixture of vegetables such as corn, lima beans, and zucchini; scallops are sauteed for a few minutes and served on top. The first time I made this I used jumbo scallops, which are quite large but which are also extremely expensive. This time, I just used small ones.

Dessert was the most complicated piece, as it often is, because it is the most important. (I am only half-joking).

In general, a trifle is “a dessert dish made from… custard, fruit, sponge cake, fruit juice or gelatin, and whipped cream”, arranged in layers (Wikipedia). In this case, the trifle is made from lemon curd, gingerbread baked from scratch, and a blackberry sauce.

The flavors go really well together. You get the sweetness of the gingerbread first, which is balanced by the lemon curd, and finally the tart blackberry sauce hits you. As time goes on, the flavors and textures come together even more. This is very similar to banana pudding, which I would argue is also a kind of trifle.