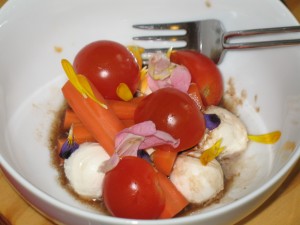 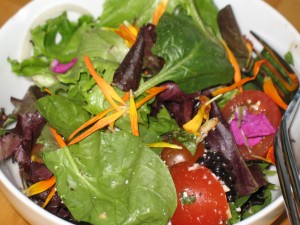 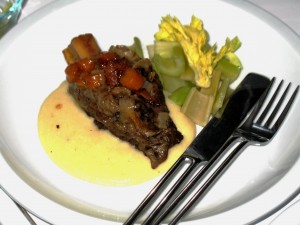 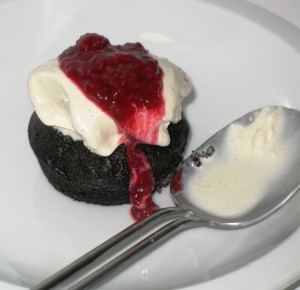 About three weeks ago (way behind on posts here), I decided to try my hand at braised short ribs again - they are basically foolproof, and I was cooking for my fiancee and a friend of hers so did not want to screw up too badly :)

The last time I made these ribs, I complained that while they were delicious, I thought the lid had come off the dutch oven, since the vast majority of the sauce seemed to have boiled off.

So this time, I was very careful to make sure the lid was on tight, and to check the ribs as they cooked.

A lot of the sauce did appear to have boiled off again - where it could have gone, I do not know - or to have disappeared or thickened so as to be unrecognizable. However, there was enough left to dress the ribs after they came out, which I wasn’t able to do last time. At the picture of the left, you can see the carrot cubes, for example.

I served the ribs over the same polenta I made last time, and alongside some celery braised in beef stock, since I happened to have some leftover celery, and since I thought that would go well. I garnished the celery stalks with the trimmed celery leaves. I really like using the culinarily-unconsidered parts of vegetables, such as beet greens, celery flowers, chard stems. I often buy carrots with the tops still attached (cheaper that way), and I would love to try cooking carrot greens sometime. These odds and ends often have, or can be endowed with, good flavor, and they are free!

For a starter salad, I served this summery blackberry salad, with some edible flowers on top. These flowers are available at Whole Foods and probably other grocery stores, and they taste like, um, flowers.

But they’re good. And mostly, they’re a useful cheap trick to make a salad look amazingly colorful and appetizing, which is especially nice in summer. Because my fiancee wanted a snack before dinner, I also made a “preview salad” using some of the same ingredients, along with some tomatoes and mozzarella, and carrots I had been “pickling” (in quotes because I would consider what I did more of a long marinade).

For dessert, I served these chocolate beet cupcakes with some store-bought vanilla ice cream (Haagen-Dazs “Five” was on sale), and a quick raspberry syrup. “Five” is interesting - it’s named that way because it only contains five ingredients: cream, sugar, eggs, milk and in this case vanilla. But why is it so expensive? Is it because other ice creams use fillers or something like that, or add ingredients that extend shelf life?