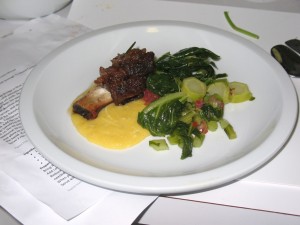 A little while ago I made this recipe. It was a chance to cook (a) short ribs, and also (b) polenta. I’ve cooked polenta before, but it was basically a big disaster and I had to throw it out. Later in this entry I’ll come back to what I learned that improved it this time.

The way this dish works is, basically, as in a coq au vin or a lot of other classic braised dishes, you add a meat to a sauce and cook it for a very, very long time (hours). As a  result, the meat almost disintegrates. This technique can help make very cheap cuts of meat, or cuts of meat that would otherwise be hard to eat because of connective tissue - such as ribs - extremely delicious.

Cooking the meat for a long time in a sauce has several advantages. One, it keeps the meat moist and also gives it some additional flavor. Two, I’m pretty sure it lets you cook the meat much longer without risk of burning. Three, because the connective tissue in the meat melts, it seeps out into the sauce. When the sauce cools again, it gelatinizes somewhat because the molecules of the connective tissue solidify, which gives you a richer sauce. Plus the sauce picks up some of the flavor from the meat in turn. Four, because of all the positive effects previously listed, you can use much cheaper cuts of meat (or hard vegetables, for that matter) and still have them taste wonderful. In fact, cheaper cuts of meat are probably preferable.

Braising does all this. I’ve heard an expression that beer is proof that God loves us and wants us to be happy. One of the things I really like about cooking is that you uncover many magical chemical reactions that allow you to create delicious food not very expensively. They further substantiate this idea.

Anyway, the recipe says to braise the ribs for about three hours in a sauce with some wine, vegetables, and other stuff. The local supermarket didn’t have short ribs, so I used - I want to say “back ribs”? - I can’t remember what, exactly. If you look at this page they say there’s only short ribs and back ribs, and the back ribs are less meaty. That sounds right. (They weren’t baby back ribs, by the way).

I was a little frustrated at the time that I couldn’t find short ribs, since the back ribs I was buying didn’t look meaty enough. How wrong I was. The ribs came out really well, and one rib per diner - which I would originally have thought would not be enough for anyone - was in fact perfect along with the collard greens and polenta. I must have left the lid off the dutch oven by accident, so the sauce mostly evaporated into an oily mess, but the ribs were still pretty delicious.

I served them along with polenta and collard greens. Collard greens are really bitter, so I blanched them, then steamed them, then sauted them with some pepper flakes, garlic and onions, and salt and pepper. I used these instructions, which I’m reasonably sure are overkill. Blanching (boiling quickly) the greens seemed to make sense, but I don’t know why steaming would help. I also cut up the stems and cooked them along with the leaves, since I don’t like to waste food. If you leave them to boil a few minutes longer than the leaves, it works out.

I had never cooked polenta before, except that one time I mentioned before. Let me just say that, now that I have cooked it properly, polenta is amazing. Like rice and beans, or risotto, the trick is to cook it with a very flavorful liquid, such as wine or broth (in this case both). And it’s literally just corn meal that you buy at $2 for 10 servings, or whatever.

It’s very easy to make, since you don’t have to give it nearly as much attention as, for example, risotto. It is also really delicious, so the next day I made polenta with cream and butter as a breakfast side.

The trick with polenta, by the way, is to whisk for your life as you pour it into your cooking liquid. Otherwise it gets lumpy. Whisking vigorously seems to be important in a lot of things, such as this caramel sauce. This is another magical thing to me - just basically stirring for a while makes the difference between deliciousness and inedibility.

Oh yeah, one thing I’ve noticed you often do with braised dishes is sautee some bacon in your pot before adding the stuff you actually mean to cook. (The fat and flavor end up in the dish, the bacon itself is discarded). I threw the cooked bacon in with the collard greens.