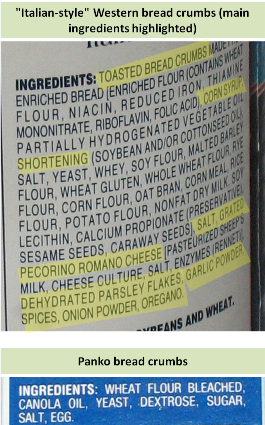 [caption id="attachment_571" align="alignleft" width="265" caption="Comparing the ingredients. The can of Western-style breadcrumbs gives more detail on its components, which is the main reason for the longer list."][/caption] 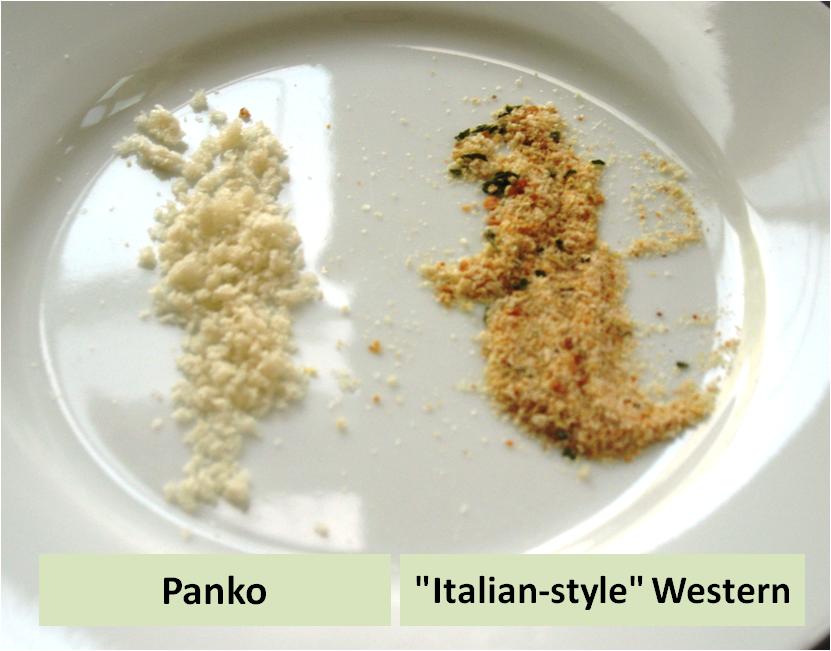 [caption id="attachment_572" align="alignleft" width="265" caption="Comparing the texture side by side."][/caption]

Recently I was asked what the difference is between panko bread crumbs, which I started hearing about a few years ago, and just plain old breadcrumbs. I didn’t know, so I decided to do some research.

Next, I went to the Wikipedia article for panko. Apparently, the major ingredient difference is simply that panko is made from bread without crusts! This seemed to be corroborated by a few other sources.

Food is not just its ingredients, of course. If you compare panko and regular bread crumbs side by side, there are a few other differences. Panko seems to be ground more coarsely. As a result, it has a crunchier texture; regular breadcrumbs are a little more like sand. Panko also doesn’t seem to be toasted as thoroughly, though it’s difficult to say for sure. This particular type of breadcrumb has a bunch of added spices and dried herbs, which makes it taste and look different as well, but that doesn’t matter for the basic comparison.