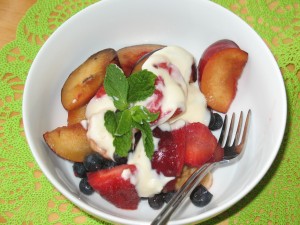 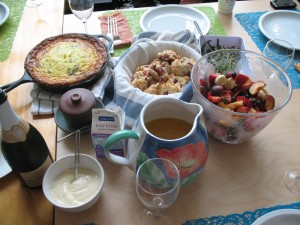 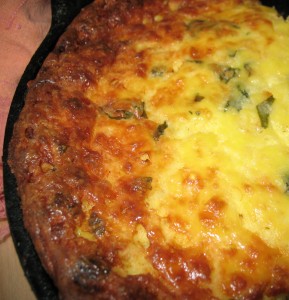 For the first meeting of my Wharton learning team, I decided to make dinner. So I thought that, for the last meeting, it might be fitting to make breakfast. Plus breakfast would give me the chance to make a frittata; an excuse to make a new dish is often an important motivator for me. And I thought it would be a nice thing to do!

I got up early - real early; sunrise in our apartment is beautiful since we have a northern exposure. I made a fruit salad with a lemon/yogurt/honey sauce, I experimented with substituting strawberries for onions in this scone recipe (result fine), roasted some asparagus, and squeezed some orange juice. Oh, and I made this basil-potato frittata, which you can see in closeup on the left.

Fruit salad is kind of cheating, isn’t it? (So is fresh-squeezed orange juice, but it’s a crowd-pleaser). Regardless, people seemed to enjoy it. Since the Trader Joe’s that I live above doesn’t have great produce, I had to make some last-minute decisions about what went in, but the banana/plum/ berry combination seemed to work well.

I also had a chance to include _actinidia arguta_, also known as the hardy kiwi or kiwi berry. This was a fairly expensive addition, but I always like to try interesting products when I see them. The kiwi berry is basically a miniature kiwi, with a grape-like skin that you don’t need to peel off. Not really worth the extra money, but an interesting eating experience. I should mention, however, that I usually eat kiwis with the skin on, so perhaps I find regular kiwis (actinidia deliciosa) easier to handle than others do.

The frittata came out really well, also, and made great leftovers. I had never eaten one before this - for those who don’t know, a frittata is sort of like a quiche or giant omelette. However, unlike a quiche, there is no pastry shell, and unlike an omelette, the ingredients are cooked within the egg mixture instead of on top. This recipe includes a little baking powder as well, so you get some extra fluffiness, and since it’s baked for about an hour, a delicious and beautiful brown crust develops around the edges.

Not all was successful. I invested a huge amount of time in making this hash browns recipe - peeling 1.5 lbs of potatoes takes forever - and it was a total failure. I have never made hash browns before, so perhaps I did something wrong in making the recipe. Did excluding the lardons make that much of a difference? Did I just not wring the shredded potatoes out enough? Whatever the error, I was left with a disc of shredded potatoes, burned on the outside and soggy and uncooked on the inside, that stuck fast to the pan.