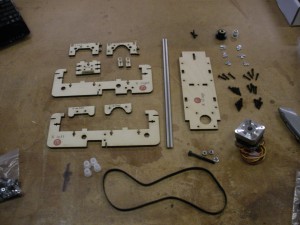 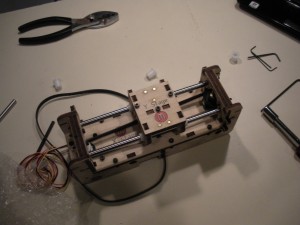 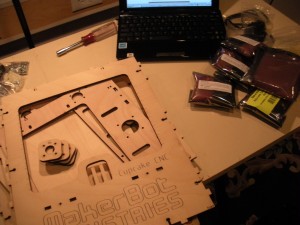 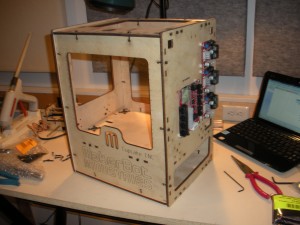 This was a pretty major couple of build steps; I’d say I’m about halfway done now. Overall, the build was successful, but I ran into a couple of problems. The first was that I managed to put in the aluminum drive pulley in upside-down. The aluminum drive pulley will pull the belt that allows the Makerbot build platform to move along the x-axis - so, it allows movement from left to right. I’m not sure exactly how this happened, but I think I was confused by the instruction to put the pulley onto the motor shaft “set screw end first”.

This was definitely my mistake, but I guess I thought that meant “set screw end up”, and for some reason I ignored the picture. I only managed to fix this when my fiancee’s dad pointed it out to me - otherwise I would happily have allowed the belt to sit slanted, which would have happened because it wouldn’t have been vertically aligned with the idler pulley on the other end of the belt.

The idler pulley was my second mistake, and I don’t just mean the vertical alignment. Instead, it was simply mounted in a wobbly fashion. The reason for this is as follows: the instructions say to “set aside the small idler pulley”, but it wasn’t until I tried explaining this to someone else that I realize there were actually different pulley sizes. As a result, I spent a fair amount of time using a pulley that was unstable because it was far too big for the screw that was anchoring it.

Finally, it also turns out that during yesterday’s build, I had actually used the wrong drive belt for a certain task. The instructions specify e.g. “the 196-tooth belt”; I just guessed at which belt was which, as I didn’t realize the tooth numbers are actually printed on the sides. I realized this when today’s instructions called for the “second-shortest drive belt” (the one I had used), so I was able to fix the error. I wish the previous day’s instructions had been as specific!

I ran into a few manufacturing defects as well. As usual, some of the parts don’t fit together perfectly as they aren’t machined exactly enough; this is totally understandable. Also, one of the bolts, which happens to occupy a critical position, is a little bit too long. This means that the Makerbot is unable to move the build platform in a particular direction. I had to go through a fairly long process of trial and error to figure out how to shorten this bolt with the equipment on hand (I ended up using a hacksaw to shave off the extra length). I was slightly surprised at this oversight, though it is explicitly mentioned in the instructions.

Other than that, the build was pretty uneventful. I built the body as well, which basically meant a long process of tediously bolting together the sides, back and front.

This is the sort of thing I would pay money to have done for me - it takes about an hour to get all 60-odd bolts and nuts in the right place, but there is no real thinking involved. I also thought it might be interesting to paint and otherwise decorate Makerbots. Since most of the structural pieces are just wood, this would be pretty easy, and the instructions even explicitly mention that you should do any decorating before you do the assembly. Anyway, at the end of the day I had a complete Makerbot body.

In the course of the build, I was also asked the very interesting question of what the “killer app” is for the Makerbot. That is, what is the application that results in millions of people buying a desktop fabricator and putting it in their homes, the way they bought the telephone, dishwasher, refrigerator, television, etc. - all the standard equipment that had to be introduced and marketed at some point in the past.

I answered that I don’t know. Right now, the Makerbot is really targeted at hobbyists and other people who are curious about the technology. It’s not yet particularly usable “for” anything. As far as what it could be sold as today, I think it’s mainly useful for artists who want to incorporate printed objects into their work, whether that’s individual sculptures, or mass-market pieces as might have been created with Bakelite ninety years ago. There are some other random applications as well, such as certain technical tasks in e.g. jewelry making. But no killer app yet, until the technology can be dramatically improved.

The next key step is to figure out a way to generate cash flow so that more can be invested into R&D on desktop fabricators - specifically, improving their ease of use and capabilities. This will require lots of market research, and identifying at least the interim “killer app” for certain niche markets.