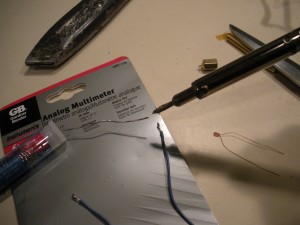 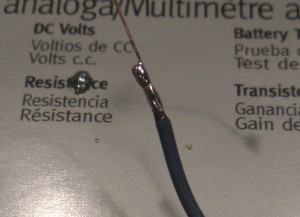 Alright, today I thought I was going to be able to finish this whole project off, but I didn’t quite get there. Got close, though.

The first thing I had to do was finish building the extruder, which took quite a while. I had a fair amount more soldering to do, including hooking up the thermistor, which measures temperature and allows the information to be transmitted electronically.

I ran into lots of problems today, including wires breaking (and therefore needing to be re-stripped and re-soldered), tight fits, and various other random issues. At one point, I needed to use a small steel rod to determine the appropriate spacing between two components. But everything seemed to come together in the end. Until I started hooking the Makerbot up to my computer to start doing some calibration and testing of the extruder.

Makerbot has great software called ReplicatorG that helps you interact with your Makerbot. Specifically, you can send it things to print, and you can also manually move the build platform around and do other things as well. Unfortunately, when I went to use ReplicatorG, I was unable to get it to communicate with my extruder. Therefore, no printing. I took a pretty careful look around some help forums, and while I found some good ideas that I will try tomorrow, I’m not optimistic about getting this to work soon.

The good news, however, is that everything else seems to work well - the platforms move just as they should, which proves that that’s all built correctly. More as it develops on the extruder issue.