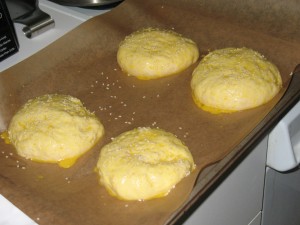 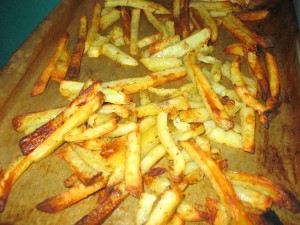 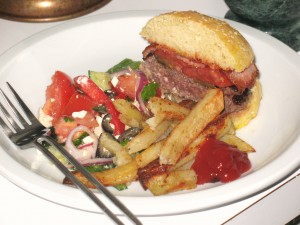 Recently, I decided to make burgers and fries for dinner. Sounds simple enough, right? Except I thought I would try to make as much as I could possibly make from scratch, from scratch. This ended up being  the buns, the burger patties, and the mayonnaise that went on the buns. And the fries. In theory I could have also made the pickles, the ketchup and the mustard, but I’ll save that for next time.

This wasn’t extremely difficult, just very time consuming. I used this recipe for “brioche buns”. These came out well - and they were beautiful to look at - although they weren’t quite what I was expecting. It is possible I made them incorrectly, but I was hoping for a slightly more crunchy sort of bun, which didn’t happen even after I toasted them. No big deal, they came out great.

I used Alton Brown’s recipe for the burgers, which are a combination of chuck and sirloin. Not a lot to talk about here. I don’t quite understand what the differences between the various beef cuts are yet, but maybe I’ll be qualified to comment on that in the future. AB recommends a 4-minute sear on each side, which gives these burgers a really tasty, crunchy char on the outside together with a medium rare center. Excellent. I also used his mayonnaise recipe for the mayonnaise that I put on the burgers. Did I mention I have developed a taste for mayonnaise since learning how to make it myself?

I assembled the burgers with mustard, ketchup, mayonnaise, and bacon. Bacon is another ingredient I have developed a taste for since I began cooking, in violation of my no-bacon rule from years ago. It really does taste great on burgers.

Alongside, I served a simple Greek salad and some home-baked fries - I had originally intended to actually fry the fries, but I didn’t have the energy. The problem with frying is that not only is it messy and expensive - you have to use a fair amount of oil, which you may not be able to reclaim - it’s also a technique that takes time to master.

See my fried chicken entry for more, but you constantly run the risk of burning the outside while you get the inside cooked, or leaving a raw inside with a crispy outside. Had I actually decided to do this I would have quick-fried the outside and finished them in the oven. As it turned out, just baking the fries was totally fine, though it’s a numbers game (only some fries will turn out alright, but it’s not always clear which).

For dessert, I made this souffle-like thing. It’s not actually a souffle at all, it’s a frozen Cognac meringue with chunks of almond praline. Pretty good, actually, and the praline is particularly delicious.  One day I will try this with some other flavors instead.

Update June 2010: Here’s an interesting post on how to make one particular type of French fry.