Caramel and chocolate pear cake, and a cauliflower curry

I spent a few hours yesterday on some things. 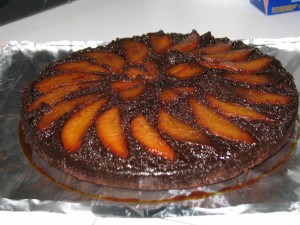 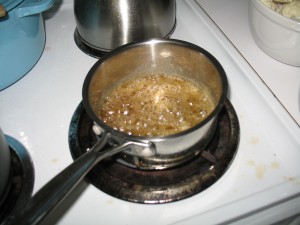 [caption id="attachment_201" align="alignleft" width="300" caption="Caramel using the "old method". It's boiling. This is not necessary, and doesn't work for me."][/caption] 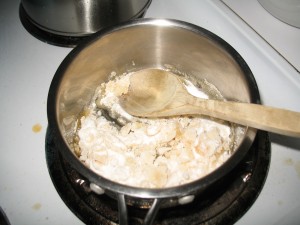 [caption id="attachment_205" align="alignleft" width="300" caption="Caramel using the new method. I drag the sugar around as it's melting, and lumps of caramelized sugar start to form..."][/caption] 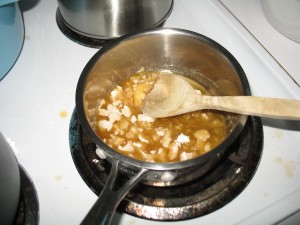 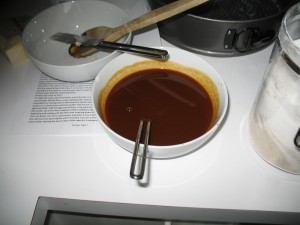 [caption id="attachment_203" align="alignleft" width="300" caption="So, eventually, I was actually able to make a sauce out of this."][/caption]

Making caramel was a really interesting experience. I first bought a whole bunch of plain sugar, since I expected to ruin several batches before I got it right. I then stumbled across this method for making caramel. In the past, when I’ve tried to make e.g. flan, I’ve been told that I need to have both water and sugar in the pan. I’m not sure exactly what went wrong, but this has been uniformly disastrous (to varying degrees). When I cooked a bunch of sugar, slowly, letting it melt, according to that method, it seemed to just work. It was kind of like making risotto in reverse; instead of waiting for the liquid I added to be soaked up by rice grains, I waited for the sugar grains to dissolve into liquid.

So, as it turned out, it wasn’t that difficult. Since I now had extra caramel, I decided to go ahead and try making a sauce. In typical Justin style, the first time I did this I just added a half-cup of milk to the caramel. Result: catastrophe. The milk curdled immediately, and the caramel seized up into a giant, burned ball. I guess the chemistry here is such that the caramel is a somewhat fragile system.

I then decided to look up an actual recipe for caramel. The key is first of all to add butter. And the other key is to whisk like hell when you add the butter in. The caramel bubbled up violently at first, but as I kept whisking, and hoping it would work, the sauce eventually came together and settled down. The exact same thing happened when I added milk. At the end, I came out with a pretty decent caramel sauce. It was amazing how much whisking actually transformed the dish, and I’ve noticed this happens in a lot of other contexts as well. For example, when you whisk cream enough, it turns into whipped cream. It’s pretty amazing.

Once that was done, I used it to line the bottom of a cake pan, and then put in some pear slices and chocolate cake batter. I think I may have overbaked it slightly. The diameter of the cake pan really does make a big difference, by the way - I used a 10-inch instead of a 9-inch pan, so I had to make adjustments. See the chart for how that affects the thickness of the cake. The thickness in turn affects the baking time, but I don’t know exactly how. I just tried to be really careful!

The cake came out well, though I’m realizing I’m not sure if I like caramel. Afterward, I put together a lamb and cauliflower curry. This was fine, though underseasoned in several ways - I didn’t use enough salt, I forgot to buy an onion, and I didn’t have the cilantro called for in the recipe. Lilli also pointed out to me that the recipe calls for light coconut milk, but there’s no reason to actually follow this recommendation. Finally, I don’t think I put enough curry paste in. I will try it again at some point “for real”.

I really need to use much more salt that I do. Watching “Secrets of a Restaurant Chef” with Anne Burrell this morning, I saw that she probably used a quarter-cup of salt, or more, to season a couple of Cornish game hens! I may make it my mission to oversalt something soon, to see if I am physically capable of doing it. Another way to do this would be to roast some batches of potatoes as another experiment.