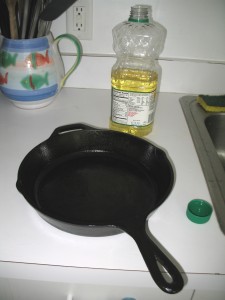 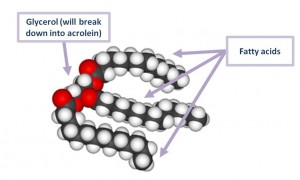 It has a few minor disadvantages, too. It’s heavy. It heats slowly (this, along with its heft, make it inconvenient for sauteing). And it’s reactive, so in theory it can’t be used for acidic foods such as tomatoes without imparting strange flavors and colors, though I do this occasionally and haven’t had any problems yet. I also don’t know how evenly it conducts heat.

On balance, however, cast iron’s advantages so outweigh the disadvantages that I believe it’s one of those happy cases where cheapness and goodness coincide. Cast iron also has one other major advantage, which is that

I was surprised to learn this, since I usually find cast iron quite sticky. But actually, once it has gone through a process of “seasoning”, cast iron can apparently start to build a formidable nonstick layer that will in many cases only get more effective over time. Such a layer is far better than other nonstick surfaces such as teflon, which in time inevitably flake away or decompose and result in delicious teflon seasoning in whatever you are eating.

How is cast iron seasoned? The basic method is to coat it with a thin layer of oil, then put it in a very hot oven for about an hour. As far as I can tell, the temperature of the oven must be above the oil’s smoke point, which causes the oil to burn off. Here is my best guess at what is actually happening chemically, although nobody seems to know for sure:

So, anyway, I went ahead and did this; it probably took about a half-hour of attended time. In fact, I did it again the next day. So far, it seems to be less sticky, but I still have to use cooking oil every time I cook. So I don’t know if I did it right. (Update about a month later: it’s still a bit sticky, so I guess building a good seasoning layer just takes time…)

Part of the process of properly seasoning the pan seems to be an unwillingness to wash it thoroughly, to allow fats to continue building up on the surface and burning away. I am willing to leave a greasy surface behind each time I cook, for sure. Let’s see if that makes a difference in the months to come.