Recently I decided to make an English breakfast. But I had three things on my “to cook” list that I figured I could knock out at the same time - naan, chai tea, and tomato chutney. So I decided to serve these together with mushrooms, asparagus, scrambled eggs, and orange juice. 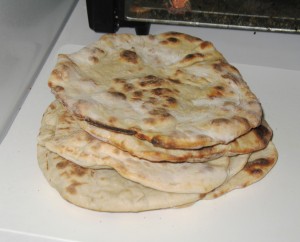 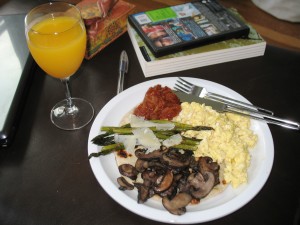 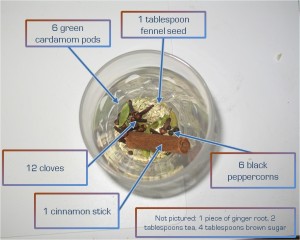 The naan was incredibly easy to make, using this recipe. The dough is yogurt, flour and a little bit of salt and baking powder - that’s it! The bread magically puffs up in the oven. While the naan fresh out of the oven was quite good, I unfortunately had overworked the dough severely, resulting in an abundance of gluten.  As a result, it became inedibly tough and chewy after a day or so in the fridge. Ah well. It was pretty good for a first try.

For the chutney, I used this recipe. I don’t understand why most chutney recipes I’ve seen call for the addition of raisins, but I have started leaving them out and I think that’s the right thing - their flavor and texture are extremely disruptive after they’ve been cooked for a while. The recipe does not suggest seeding the tomatoes, which I think I will do next time, because otherwise you basically get a tomato juice which you need to boil down in order for it to take on the right consistency.

The chai tea was delicious. The combination of spices is complex and comforting. See diagram to the left. (Note to fastidious readers: I realize that “chai” means “tea”).