Chicken with 40 cloves of garlic 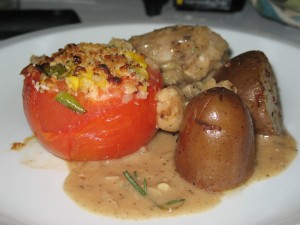 I’ve been wanting to cook Ina Garten’s Chicken with 40 Cloves of Garlic for some time now, so I finally did. Garlic is a very strong flavor, and there was actually a time when I didn’t like to have it in anything, so I thought it would be interesting to see how this turned out.

Because the garlic gets cooked for about an hour in a sauce, the flavor of the garlic cloves themselves isn’t that strong. Not only does it actually turn sweet - which is what generally happens when garlic is roasted or otherwise cooked for a long time - its flavor also diffuses throughout the sauce. Anyway, it’s very good. The sauce also has cognac and cream, much like the sauce for a steak au poivre.

On the side I served stuffed tomatoes, which I adapted from this recipe for stuffed peppers. The tomatoes are stuffed with a bunch of things, including more tomatoes, which are peeled and seeded. This is important, I guess the tomato skins wouldn’t be appropriate for a stuffing. I’ve never peeled a tomato before. Actually pretty easy with a standard vegetable peeler.

I also made some sauteed potatoes from this recipe. It basically calls for taking 2 pounds of new potatoes (or cutting other types of potatoes to that size), and putting them in a hot, covered pan with half a stick of butter for 20 - 30 minutes. Then you toss with 3 tablespoons of green herbs (e.g. rosemary, parsley, chives, dill etc.). I was amazed at how easy this was, and it turned out really well too.