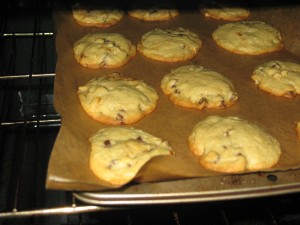 Yesterday I baked chocolate chip cookies - I’ve never done this before. The cookies came out alright, but my sense is that they’re hard to screw up. I did learn a couple of important things about my oven, though. The most important of those things is that it’s impossible to bake two trays of cookies at once! The bottom one burns, or the top one doesn’t get cooked. I have to start thinking about oven placement because it seems the heat doesn’t get distributed evenly.

I used Alton Brown’s recipe from “Three Chips for Sister Marsha”, which is here. On that episode, Alton Brown features three recipes, “The Thin”, “The Puffy”, and “The Chewy”, which are all featured on the main page for that episode.

By studying the transcript I found for that episode, I was able to get some information about why the various ingredient combinations have the effects they do, chemically. Let’s compare, shall we? I’m using the “thin” recipe as the basic recipe in the comparison below, and then giving the reasons for the changes made for the “chewy” and “puffy” recipes. I have some questions, too…

Interestingly, the “puffy” version also gets chilled before it gets baked, because cold dough tends to spread more slowly (but doesn’t it get heated up in the oven?) In doing the research for this, I also learned that for cookies, like custards, if it looks done in the oven, it’s overdone. They’re supposed to be pulled out when still slightly soft.