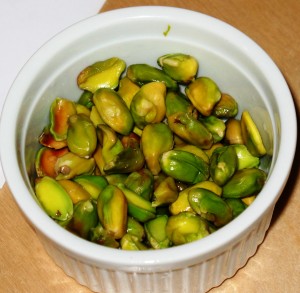 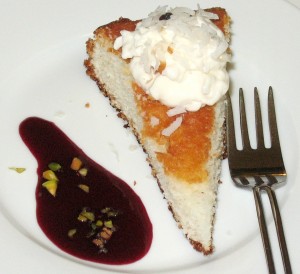 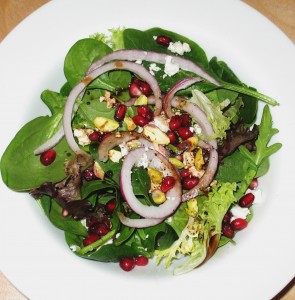 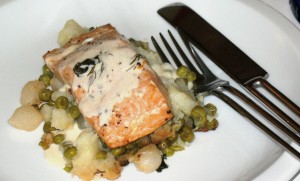 Wow, this entry is late. Anyway, just before the holidays I had the chance to cook for some people from my class at school, which was really fun.

Let me start at the end and work backwards. Dessert was a coconut cake, with a hibiscus sauce and some toasted pistachios.

Coconut cake’s been on my list for a while now, and I’m glad I finally got a chance to make it. I am also frustrated that I burned the bottom of the cake slightly. There are several ways to test the doneness of a cake, including inserting a toothpick and seeing if it comes out clean (the toothpick test), seeing whether the cake springs back when you depress the top, and also waiting for it to start pulling away from the sides of the pan. I generally use the toothpick test, and I’m worried that I’m being too stringent since things I bake often come out a little overdone. In writing this, I realize the other possible problem is that I am using very long toothpicks that we happen to have. I wonder whether the point of the toothpick test is that it is only supposed to check the middle of the cake?

But what was really fun was making the hibiscus sauce. First of all, hibiscus isn’t that easy to track down, especially in Philadelphia. What saved me were some totally awesome Mexican grocery stores in the Italian Market neighborhood, specifically the one right next to Taqueria Verecruzana at 930 Washington St. They stock an incredible array of stuff in a tiny space! I didn’t really know what hibiscus flowers even looked like but fortunately was able to recognize their Spanish name, jamaica. Oh yeah, and the sauce was really delicious, and a beautiful, deep purple color.

For the main course I baked some salmon and served with a really tasty mashed potato, pearl onion, pea and dill mixture. At the last minute, I figured it could use a sauce, so I whipped something up with lemon, white wine, dill and cream.

Before that, I served an appetizer of mushroom duxelles in puff pastry, with a little thyme and a smoked tomato sauce. Duxelles is basically a mushroom paste with cream and white wine, named after the duke of Uxelles, who employed the chef who created it. (I think it would be a little bit of a stretch to call what I made duxelles, but I’m working on it!) I got the general outline of that recipe here.

And finally, for the salad, I served this pomegranate and spinach salad. I think I have written about this before. Note that it only works with fresh pomegranate seeds, and also almonds really do work better in this recipe than walnuts, which is what I used.