It turns out that it’s possible to make ice cream using solely coconut milk and cream. (This is one way, for example, that vegan ice cream is made). I assume you usually end up with very coconut-flavored ice cream, but you can also mix in other flavors. It’s just another way of assembling an ice cream. 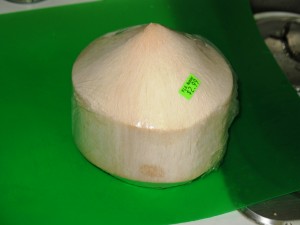 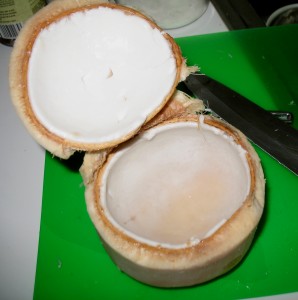 So I thought I would try making some ice cream this way for my recent eight-course dinner, to go along with (a) a sorbet and (b) a traditional ice cream. The result was OK - unfortunately I realized partway through that I really don’t like coconut enough to enjoy coconut ice cream!

Nevertheless, the process was interesting, as I got a chance to learn about the various components of coconuts and their culinary possibilities. Here are a few notes.

First, there’s the difference between old coconuts and young coconuts. When I used to think of coconuts, I would think of a mature coconut. But it’s also possible to buy young coconuts, which are generally identifiable by their unique shape - cylinders with pointy tips. Young coconuts have more, and softer flesh, than mature coconuts. They also contain more liquid, and therefore seem to me to be more useful from a culinary perspective, though that is just a guess.

There are also several products you can get, or make, from a coconut.