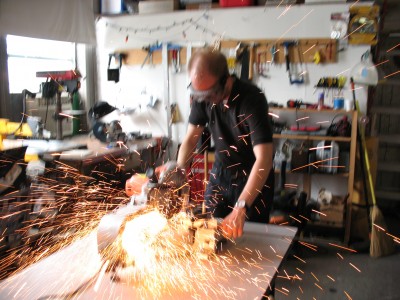 This is the first entry in a series of four exploring the design, packaging and user experience of 3D printing kits. Each article will be published to the front page of this blog, but you can also find them, as well as other articles I’ve written about open-source 3D printing, on my 3D printing topic page.

The last time I wrote about 3D printing, I said that I was concerned about where the open-source 3D printing industry is going. A lot of companies make build-your-own 3D printer kits, including of course the main player in this space, Makerbot (which just got $10m in VC funding, by the way – including money from, I believe, Jeff Bezos. Very cool).

Other kit makers include ShaperCube, Ultimaker, MakerGear, etc. In addition to those, from what I’ve seen and heard in talking to knowledgeable people, _more _startups and kits are on the way. And of course the RepRap Project, which is the (too-often unacknowledged) foundation of Makerbot’s and everyone else’s technology, continues to improve and spawn new kit iterations.

These kits are going to get better and better in engineering, capabilities and reliability, while decreasing in cost. But what worries me is that none of these companies seem to be focusing on making these kits easy to understand and build, especially for people who are new to 3D printing. I built my Makerbot about a year ago, so it’s certainly possible that things have changed significantly since then. But my experience as a newcomer to DIY projects was that Makerbot assumed a lot of knowledge and a tremendous willingness to solve problems that probably should have been solved for me when I bought the kit.

That’s fine for now, I think, but in order for DIY 3D printing – and DIY culture more generally – to scale dramatically, maker-entrepreneurs will need to concentrate more on user experience design for non-makers. And of course aesthetic design, as well; I left my Makerbot unattended at school one day, and when I returned security questioned me as to its purpose and stopped just short of asking me whether I intended to use it to blow up the University.

“User experience design” covers considerations including style, construction, documentation and packaging. I guess one other way of saying that makers should spend more time on user experience is to say that DIY projects should be more user­-oriented, appealing to the builder’s needs, rather than _artifact-oriented, _which is the current business / design model. “Check out how cool this is!” as opposed to “look how easily you can do this!“, or even “here’s why you should want to do this!”, where _you _can be anyone.

And I don’t see that happening right now, at least not on the scale I’d like to see. According to the funding announcement on Makerbot’s blog, they’ve sold about 5,000 printers so far. This is an incredible achievement and one worthy of all the praise that has been heaped on Makerbot, and I have no doubt that that number will increase rapidly, especially now. But it is a really, really small number compared to what DIY 3D printing could be, and should be.

And it’s a tiny number compared to what the Maker movement can become and I believe will become. (And even must become for the health of our society, but I think that is a separate blog post or series of posts).

To explore some of these ideas further – how 3D printers can be made more appealing to newbs – I spent some of my time this summer trying to put together my own, very modest version of a 3D printer kit that is closer to what I would find fun and easy to assemble. I sourced for the RepRap Prusa Mendel, since that, frankly, is the best DIY 3D printer configuration available today. This project involved a few separate activities.

Doing this project gave me a new respect (built on top of the old respect) for the guys who are producing these kits. At the same time, it did make me question the business model a little more than I have in the past – I have a better understanding now of how much in labor and parts goes into each kit, which makes me wonder how these guys make enough margin to justify venture capital investment, especially when the plans are completely open and free for anyone else to copy.

I am publishing my experiences in a series of four articles over the next week or two. They’ll all be gathered on this page in case you want to bookmark it. While there won’t be anything mind-blowing in here for people who know a lot about DIY 3D printing already, and while what I put together is ultimately an exploration of ideas rather than a saleable product, I hope this can be a useful document for people who are interested in the space and are thinking about some of the design and marketing issues surrounding open source hardware.

In the next post, I’ll talk about sourcing the components.