This is the third entry in a series of four exploring the design, packaging and user experience of 3D printing kits. Each article will be published to the front page of this blog, but you can also find them, as well as other articles I’ve written about open-source 3D printing, on my 3D printing topic page.

Once I collected all the parts, the next step was to start actually packaging everything. The goal of this project was to focus on making a kit that’s accessible to mass market consumers, which I think implies that it’s (a) free of problems that only experts know how to solve, (b) organized, and © helpful during the build process - users should encounter parts as they need them, for example, not all at once. Where possible, the kit should also look interesting and inviting, and worth talking about and showing off.

I did a few things to try to move toward these goals. _ _ 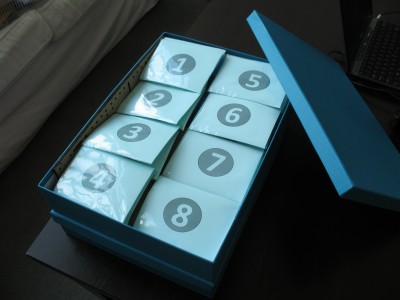 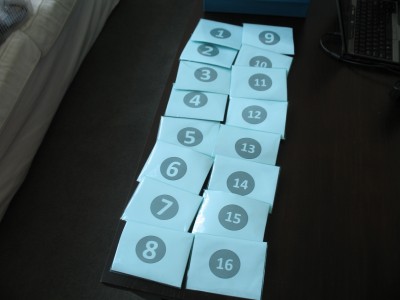 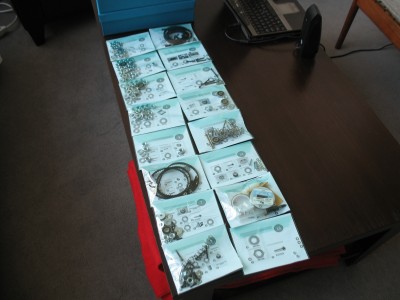 [caption id="attachment_1518" align="alignleft" width="400" caption="The reverse of the envelopes, with their contents."][/caption] 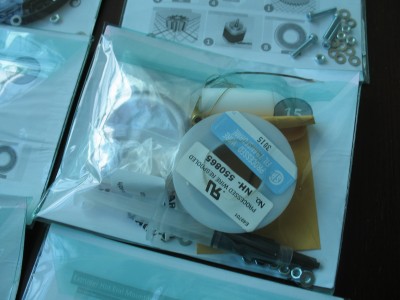 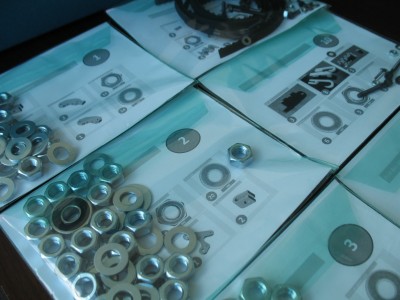 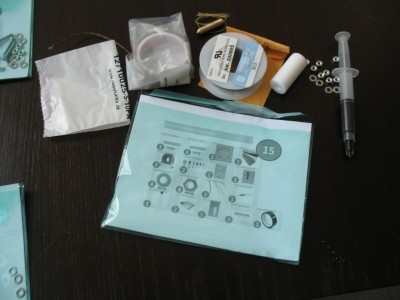 Packaging this way is also a missed opportunity. If, on the other hand, parts are organized by step, the packaging itself can help to lead the user through the build process. So, I decided to split the assembly up into 16 stages, and assign each stage an envelope that contained the necessary build parts for that stage. There are a few large parts (including 3D-printable parts) that couldn’t be included in envelopes, but these can be found and identified easily as necessary. I chose translucent plastic envelopes, because these can be easily and non-permanently closed, and because the parts can be seen inside before the envelope is opened.

Each envelope contains a card that can be read through the envelope. On the front, this card clearly specifies the step number corresponding to each envelope, and on the back is printed a visual bill of materials listing the parts that should be inside the envelope. Having a set of pictures corresponding to all the necessary parts makes it easier for end-users to identify the parts they’re using, and is also helpful for manufacturing, allowing a packager to quickly sort all the parts into their respective buckets by putting each card in a Tupperware sorting container as a guide. Card and container contents can then be transferred together into an envelope. 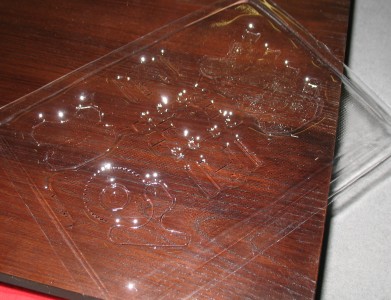 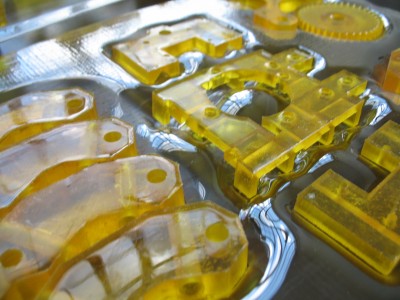 Often, the 3D-printable parts in a kit like this are packaged unceremoniously together in a Ziploc bag or box. (As mentioned above, I refer to them as “3D-printable” because I used cast resin, not a 3D printer, to make them).

This looks strange, and it also makes it difficult to find a part when you need it – you have to dig through all the parts, every time you need one. This difficulty is compounded by the fact that (a) there are a few quite large 3D-printable parts, which can make it difficult to extract the small ones if they’re all packaged together, and (b) many of the parts are complex shapes that are difficult to identify.

To solve these problems, I decided to use vacuum-formed plastic to package the 3D-printable parts. I talk more about vacuum-forming here, but basically a layer of warm plastic is put over a tray containing the parts, then stretched to fit them as it cooled. The result is a tray with a little molded space for each 3D-printable part. Molded packaging is cheap, but makes it easy to see all the 3D-printable parts at once, so it’s easy to find and extract the correct part when you need it. Related parts can be kept together (such as the x-end-idler and x-end-motor and their matching clamps), and labels could easily be added to the tray to make identification even easier.

There are several parts that come with kits that require partial assembly before they can be used. This includes cables, which sometimes come as bare wires and connectors and therefore must be cut, stripped, and crimped, and it also includes other parts such as the extruder, which requires that a length of heater wire be wrapped around the extruder nozzle, taped in place, and soldered to connecting wire.

I think companies like Makerbot have largely eliminated these steps from their kits, but in any case I think RepRap kit contributors should be aiming to do so also. It will be hard to gain popular acceptance for a kit that requires learning how to solder (or even use a multimeter) if you don’t know how to do it already.

Most kits include a set of hex wrenches or other small screwdrivers. I wonder whether, optionally, you could get an electric screwdriver with the correct bits included with your kit? They’re $20 on Amazon, and I’d estimate that a significant portion of the time I spent assembling (perhaps even 10% - 20%) was spent screwing things in manually. Sure, users can go buy an electric screwdriver, but the goal is to make the experience as seamless and pain-free as possible – and including or offering the option of tools like this might serve as a signal to new users that they should buy one.

Jigs are included in the kit I assembled, allowing a builder to quickly determine whether everything is level and whether things like frame vertices are the appropriate distance from one another.

Instructions, and packaging the kit for mailing and storage

While the RepRap community has worked very hard to document all the steps in building one of these 3D printers, and while lots of good documentation is therefore available, what I thought was really needed was IKEA-like documentation that enforced a simple way of communicating each step to the user. Luckily, we are already much of the way there – someone has produced these visual instructions that are very close to what I think the ultimate goal could be. These instructions should probably be printed and bound, to allow several people to easily share them as a build process is happening.

I didn’t give a lot of thought to the larger boxes that the kit would be packaged in (including the trays, envelopes, instructions, etc.); I went with some relatively inexpensive ones that were an attractive blue, and that were the correct size for the plastic trays I had made.

Next steps and customer feedback

While I’m done with this project for now, I designed a survey to use in case I wanted to do further research on user requirements (many of the changes I made were based on informal conversations and my own experiences). I think this survey could be generally useful for product improvement as well, which is why I’m printing it here. Tracking customer feedback post-purchase would also be important for customer satisfaction and to improve future versions. You can click “Show Survey” to see it. Show Survey »

While this isn’t technically “packaging”, part of the user experience could be value-added 3D printer building services. I also think this could (and perhaps will) be an important source of revenue for open source 3D printer companies, and perhaps all open source hardware companies, going forward. Some of these services could include:

That’s it for the composition of the kit. In the next and final entry, I’ll talk briefly about some of my conclusions from doing this project.