This is the second entry in a series of four exploring the design, packaging and user experience of 3D printing kits. Each article will be published to the front page of this blog, but you can also find them, as well as other articles I’ve written about open-source 3D printing, on my 3D printing topic page.

In the last entry, I talked about my general thoughts on producing a user-oriented 3D printing kit. In this entry, I’d like to talk about the logistics of sourcing parts for such a kit (or at least how I did, as an amateur).

To build a RepRap 3D printer, there are 3 major categories of parts that you need: 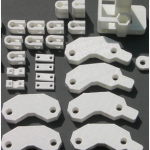 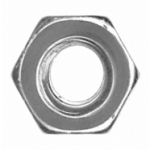 Nuts, bolts, rods, etc. Everything metal that can be found easily. 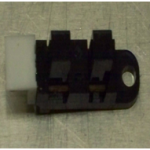 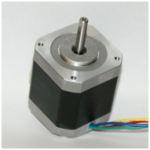 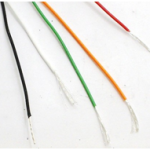 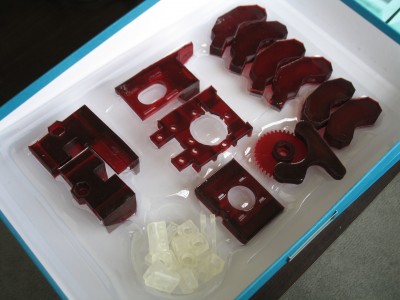 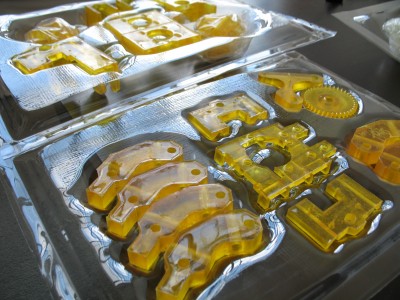 Instead of printing the 3D-printable parts (which takes a long time and often gives inconsistent results), I used a cast-resin parts kit I developed earlier in the summer. Cast-resin parts, while philosophically somewhat opposed to the RepRap concept, have a number of advantages over printed parts.

First of all, they can be produced quickly, cheaply, and professionally if enough effort is invested and the right molding equipment is used. By contrast, when these parts are produced using a DIY 3D printer, they often have inconsistencies which make them look less polished than you might expect from a professional product.

Secondly, they look cooler than printed parts and can be easily customized. “Making it your own” is an important way to make high-tech products appealing to consumers – color customization and choice is the most obvious example, and by casting these parts, you can easily offer a range of colors and transparency levels, and even other creative presentations. What about embedding little gears or sparkles in the parts, or even Jurassic Park-style insects trapped in faux amber? This is all easy to do with resins. _ _

What I’m calling “machine parts” (rods, screws, nuts, bolts, etc.) are pretty easy to acquire – you just order them from McMaster-Carr. In case you’ve never heard of McMaster-Carr before, they’re a giant hardware store that stocks almost everything you can think of, in many, many combinations.

For example, go check out the listings for screws there. You’ll get literally dozens of option categories – material, metric or SAE, length, thread size, cap type, counter or non-counter, etc. As someone who was new to buying hardware until recently, I was blown away by all the options available, all of which can be sent to you very, very quickly.

To make sure I ordered the right parts, I made a fairly complex Excel spreadsheet with the necessary part listings, quantities and McMaster-Carr part numbers. (Even so, I found I had to return a couple of things and order the correct versions – the Prusa Mendel bill of materials is not always easy to match up with listing on McMaster’s site).

If you’re interested, you can see the relevant parts of the spreadsheet here. Building a bill of materials for a product like this is very hard - since it’s a young open source project, there’s no one, authoritative source that also includes all the information one might want.

[caption id=“attachment_1544” align=“alignleft” width=“400” caption=“Getting ready to cut a threaded rod. (See the previous entry for the actual cut). This is a miter saw with a grinding wheel that cuts through metal.”] 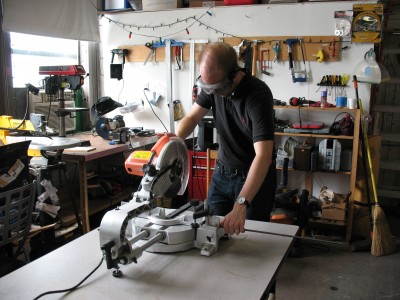 So I had to learn how to prepare all these parts for inclusion in the kits. For the threaded and smooth rods, for example, I had to figure out the best way to chop them up into the necessary lengths – the cheapest way to buy from McMaster is in meter-long lengths, when what you actually need is several odd rods with very precise lengths like 495mm. I started by using a dremel and soon found that this was basically impossible as a way of cutting them – extremely slow, slightly dangerous, and very, very ugly.

What I really needed was a grinding wheel. Fortunately there was a miter saw at Hive76 that could be properly outfitted with a grinding wheel. After it spins up, you bring it down on the metal you want to cut. Amidst a shower of bright orange sparks, you get a nice, clean cut.

Where to begin on how to source all these things? Here’s a brief list of the things you need, to give you a sense of the range of objects we’re talking about:

Oh, and not to mention electronics and motors, which are the guts of a 3D printer. You can improvise around some of the other parts if they are missing, but not these.

I used a bunch of different strategies to get these parts. Some of the parts are, fortunately, readily available at Home Depot and other hardware stores – zip ties and PTFE tape, for example, fall into this category. Some I managed to scavenge from a 3D printer kit I bought a few months ago; this was particularly important in the case of the electronics, which cost over $100 by themselves and are therefore the most expensive single component. Lastly, I got a few things from sellers on eBay – motors, for example, and some of the lasercut medium-density fiberboard that’s used for the build platform (though it would be good to learn how to lasercut eventually).

In the next entry, I’ll talk about some ideas on how a kit like this can be packaged.