Designing your own business cards with Inkscape 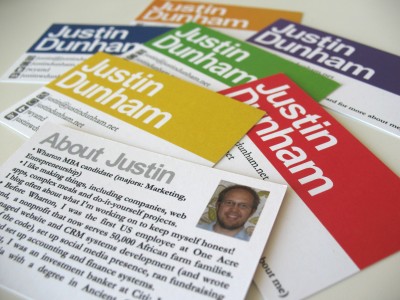 I wanted to write a quick post about creating my own business cards, which I did a few weeks ago.

I wasn’t very satisifed with the existing options out there. Even a hip business card seller like moo has a fairly limited selection of standard, rather drab-looking business cards. Plus, I think that most business cards give only an extremely limited understanding of who the card-holder is. They include your title, company, name and contact info. But isn’t who you are much more than your job? (Maybe what I’m thinking of is more of a “personal card” than a “business card”.)

So, I decided to put together my own business card design from scratch. I knew there were a few elements I wanted to include:

After messing around with Powerpoint for a few minutes, I decided that it would be better to use Inkscape if I wanted something attractive. Inkscape is to Adobe Illustrator what The Gimp is to Photoshop. It’s tremendously capable, and also free, though it can be a bit frustrating to use occasionally. I suspect I’d have similar problems with Adobe products.

I thought I may as well use Moo Cards for printing, since (a) they have a fun and easy-to-use site, unlike e.g. VistaPrint which constantly tries to trick you into buying add-on products(!), and (b) they have a great feature whereby you can have several different “backs” on your double-sided cards as part of the price. I imported Moo Cards’ template into Inkscape and started designing from there.

I won’t get deeply into how to use Inkscape, and anyway I stuck mostly to the basics. The one thing I did spend a little time on was kerning. Kerning (accomplished in Inkscape with Alt+<) allows you to manually adjust the spacing between characters, which was critical for my design since its main feature is my name in giant letters.

Interested in doing this yourself? Here’s Moo’s page with the templates, and here are my Inkscape files (in .svg format), front, back, in case you want to modify them.

You’ll need to download them and open them in Inkscape to see them properly and be able to change them. I used the .jpg template from Moo and exported the resulting Inkscape files as very high quality .pngs, which worked well; if you know what you’re doing you might want to try using a vector format instead.