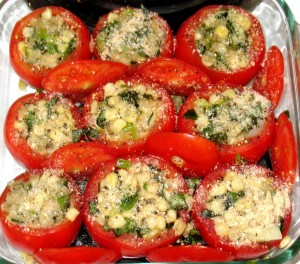 In late August I had the wonderful opportunity to make dinner for seven! I invited several of my classmates over so we could all get to know each other and finish up a class project.

I made things I’ve made before: carrot soup, stuffed tomatoes, braised celery, braised short ribs and beet risotto. Old favorites, you might even call them. I picked these because they’re relatively easy to make - and because I’ve made them so many times before I’d be unlikely to screw them up!

Culinarily, one thing that was interesting is that we had a vegetarian joining us. Cooking for vegetarians is a brand-new experience for me. To make it work, I substituted vegetable stock for the chicken stock I usually use in making risotto, and for the beef stock I usually use when braising celery.

Vegetable stock definitely does not work quite as well for risotto. You lose a certain savoriness. I may try _mushroom _stock next time, or half mushroom, half vegetable, to get that back. Vegetable stock also attenuates the color a bit - the risotto at the bottom of the pan started to turn orange!

However, I would argue that _braised celery _tastes even better with vegetable stock. If you ignore the directions to cover the pan (which I did), the stock boils off a bit, leaving you with a nice, syrupy, vaguely-tomato sauce.

Logistically, this was the only the second time I’ve cooked for more than 3 people, and I also had barely any time on the day of to completely the dishes. To resolve this, I tried to pick stuff that is either very quick to make (braised celery and to a certain extent beet risotto) or that can be made overnight (short ribs and carrot soup). Braised dishes actually tend to taste better the day after they are cooked, which was the case this time also. Something about the dispersion of the various sapid molecules, maybe?

I would guess that I spent an entire workday or so actually making the dishes, which is fairly typical when I make a complex dish - the additional servings add more time, but not twice as much to make twice as many servings, for example. Eventually, I will need to learn to reduce cooking times. I wonder how many times I have to make a dish before this happens?

Finally, I also struggled with how many servings to make. I didn’t want anyone to go hungry. On the other hand, we have been sort of overwhelmed by the amount of leftovers we’ve had lately, and I wanted to avoid that too. I actually ended up simply doubling what I normally make for me and my fiancee (which usually results in several days of leftovers). This seemed to work pretty well.

One final note: To make risotto, you essentially just spoon hot broth into hot risotto rice, wait until the broth is absorbed, and repeat. I have been skipping heating the broth before pouring it in, because it saves a little time and you end up with one fewer pot to clean. But I think this may be a big mistake. The risotto took almost an hour to make (instead of 30 minutes), and I am guessing this may be because the cool broth “shocks” the hot rice, leading to a protracted period of re-warming before anything else can be absorbed.