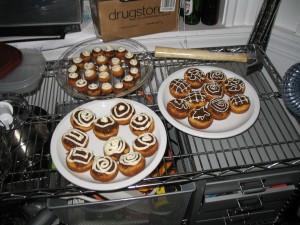 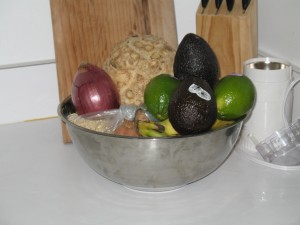 A few days ago, I planned a menu around celeriac, also known as celery root. It’s sort of like a cross between celery (which is what it tastes like), and a turnip.

That vegetable bowl to the left has avocadoes, limes, a red onion, and the big guy in the back is a 4-pound root. It’s really difficult to cut, so after peeling it, I used my knife to chop it up into about 15 pieces and then ran the pieces through the food processor.

I also cooked with another new ingredient, quinoa, which I’ve never cooked with before and have probably only eaten once or twice. Quinoa is interesting in that it actually contains protein and is very nutritionally complete for lots of other reasons.  The cupcakes I made with it (according to this recipe) came out sort of strange tasting - very nutty - but were also extremely addictive.