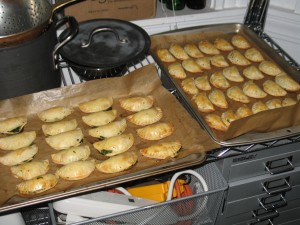 Made lots of empanadas, some filled with picadillo and others with a spinach mixture. I’ve noticed that for recipes with fillings, the recipes tend to call for a lot more filling that can actually be used together with the specified amount of dough. In this case I used just under half of all the fillings. Perhaps my filling technique is wrong?

Learned a few important things during this baking process. One was how to cut the dough properly. Last time I tried to make dough, it ended up being way too thick. About 1⁄8” is the right thickness for any potsticker-like dish. Second was how to make things move quickly. I started out by placing the fillings in the middle of each empanada first, then trying to layer the egg wash around the edge, then closing it up. As time went on, I learned to (a) do the gg wash around the edge first, (b) use a fork to keep the filling in place while closing the empanada, and © close the edges with a fork instead of pressing the edges closed.

They turned out pretty well. One of the cool things about empanadas is that you can fill them with basically anything, and they’re a convenience food. Some kind of breakfast combo would be good, as well as plantains and maybe also some kind of fruit combo. The picadillo mixture was pretty interesting - it’s raisins, ground beef, peppers, olives and spices such as cinnamon. Everything fit together really well.