Enthusiasm is important, but I’ve found that it makes working effectively more difficult.

For my own projects, this is partly because enthusiasm tends to entail a very specific vision of the future. That specific vision reduces openness to experimentation, failure and change.

For example, during business school I was very enthusiastic about the idea of starting a 3D printing company, and I spent a lot of time building out the plans for exactly how I would do it. As I was enthusiastically planning, I wasn’t taking an empirical approach to the best way to start a company, I wasn’t actually starting it, and I wasn’t paying attention to all the very concrete obstacles that were keeping me from getting there. I wasn’t generating new ideas: “I could start this type of company, or this other type, or something else entirely.” I was just focused on the first one.

On teams, I’ve noticed that those who are enthusiastic leave less room for other ideas, in the same way. They latch on to their idea and it’s hard to talk them out of it. In order for the team to be successful, others have to do the work of saying “no”, which is taxing. An enthusiastic person can’t take off the yellow hat, which forces someone else to put on the black hat.

The Yellow Hat symbolizes brightness and optimism. Under this hat you explore the positives and probe for value and benefit. The Black Hat is judgment... spot the difficulties and dangers; where things might go wrong. — Edward de Bono

And yet de Bono goes on to say that the black hat is “probably the most powerful and useful of the Hats”. That also seems wrong; constant judgment and criticism makes it hard to accomplish anything, either. The vast majority of new ideas are terrible, but a tiny percentage are in fact good and result in everything worthwhile in life. But here I might be conflating enthusiasm (which can manifest itself as interest in a single idea) with creativity, which is the ability to generate lots of ideas. Generally I see them go together, though.

Overall, I guess I advocate for an idea refinement process that balances creativity and idea building with criticism and testing: 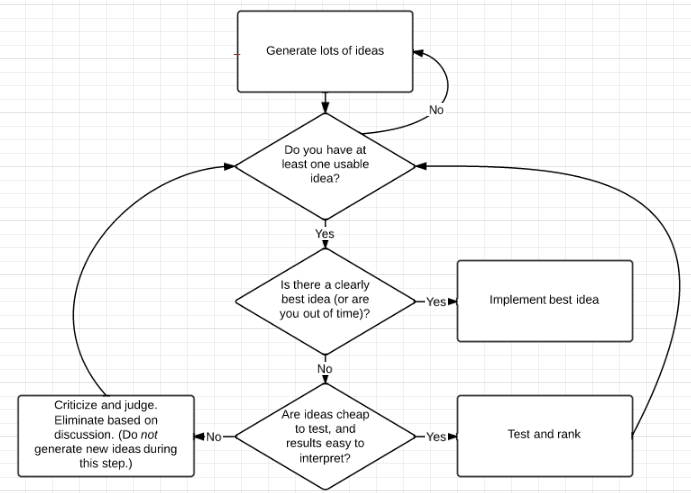 I made the generation and reduction steps different; take off one hat and put on another. And of course there’s the fact of limited time in any decision-making process, and the fact that testing is good, but a successful test might be impractical to structure or to interpret, which means we have to use judgment.