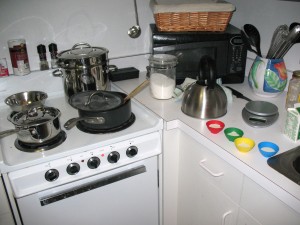 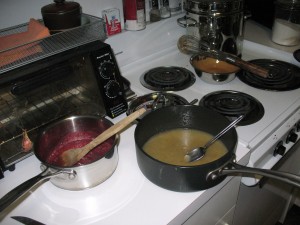 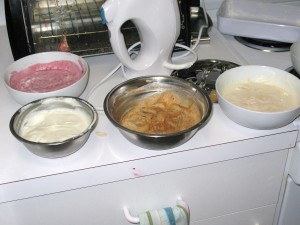 Part of what interests me about cooking is its chemistry. Many foods - especially baked goods and confections, it seems - rely on complex and specific chemical reactions for even their most basic properties.

Take whipped cream, for example. Whipping something doesn’t always make it airy; you can whip water or chicken stock and it won’t become a foam. But there is something about the chemical structure of cream, and eggs, that allows them to retain air bubbles for a period of time.

One of the first “serious” dishes I ever made was a chocolate mousse, which is an interesting way of turning chocolate into a foam. This particular recipe uses unflavored gelatin and whipped cream, but my understanding is that traditionally you would use whipped egg whites and yolks.

I started thinking, what else could I make into a mousse? So I decided to try some experiments. The first step in each was coming up with a liquid with the same approximate consistency as melted chocolate. In retrospect this may not have been necessary. Once that was done, I subsituted each liquid into the chocolate mousse recipe I linked above, adding a little or less gelatin as seemed to be necessary.

I made four mousses.

Overall, the experiment was really interesting and gave me a new side to make for various desserts and perhaps other dishes. I think the next 3 mousses to try are strawberry, peach, and kiwi. They’ll go really well with a cheesecake or other savory cake. It would be interesting to try some of these with the traditional mousse recipe as well; I’m not sure if they would work.