Fixing your own laptop, and the importance of do-it-yourself to society 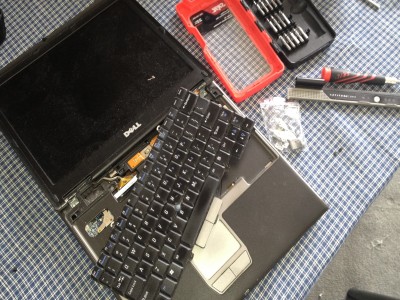 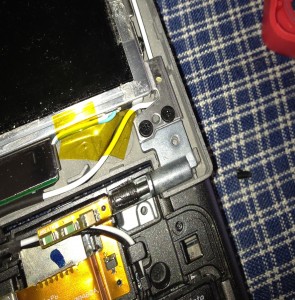 [caption id="attachment_2042" align="alignleft" width="400" caption="With the screen bezel removed. The hinge is the reverse-L-shaped thing in the lower-right corner of the gray bezel; you can see at the end, next to the yellow circuit board, how the covering (which provided the hinge's friction) has worn away."][/caption] 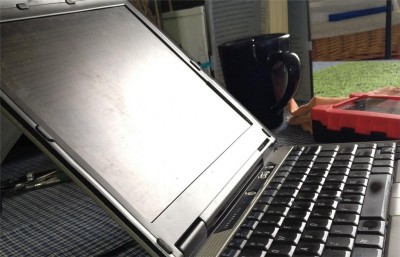 I have a snazzy new Mac now, but for about six years before that I had a Dell Latitude D410. It was top-of-the-line when I bought it, and the build quality was so awesome that it survived six years of nearly constant all-day usage, including dozens and dozens of flights, very long bus trips, and bumps without any problems. (It also, by the way, handled all the apps I needed it to run pretty well until the last two years or so).

A few months ago, however, the hinges broke. This happened to the only other person I know with this kind of laptop, so I’m guessing the hinges are the weakest point of the laptop’s construction (“weak” being a relative term). I wasn’t ready to buy a new laptop yet, and I didn’t want to pay someone else to repair it. So I decided to look into fixing it myself.

It turns out that this was an extremely good option. For about $20, I found someone selling the very hinges that I needed, on eBay. And after some Googling around, I found enough clues to how to do the repair myself.

The first step was to pry up the plastic strip with the power and volume controls, which is held in place with snaps. The keyboard can then be carefully slid out, which gives you access to the screws that hold the hinge covers in place on the keyboard half of the laptop. Finally, after removing the various rubber bumpers on the monitor bezel, you get access to enough screws to loosen the bezel, and you can very carefully use a shim to slice through the remaining glue that holds the bezel in place. After that, the hinges are fairly easy to replace, and the laptop can be reassembled. I’d suggest not reassembling fully until you confirm everything works.

From a maker-friendliness perspective, I’d give this laptop a B - not too difficult to find documentation, very easy to find parts and disassemble, with one major exception, that being the glue around the bezel.

As a final note, I think that’s all you need to do but I also took some unnecessary steps, like removing a bunch of screws from the bottom of the laptop, thinking I needed to do that to get the case open - I don’t think this is necessary but it’s worth knowing. As it turns out, the top cover of the laptop comes off too, and I could have bought a new replacement if I wanted to spruce it up a bit.

The main advantage of doing it myself was that I saved an enormous amount of money. It’s interesting how much value is trapped in old electronics and machines - value that is usually destroyed when the item in question is thrown away, but which can be easily realized by a skilled technician.

The problem is that there is so much that needs fixing, and there are usually relatively few skilled technicians. So it makes sense for them to concentrate on the highest-value repairs (the hinge in your snazzy new Mac instead of the hinge in your six-year-old Latitude). Also, there are many cases where it’s more economically efficient just to buy something new - do you repair your ‘78 Crown Vic or do you buy a used Corolla which will probably give you much better gas mileage, thus paying for itself very quickly?

One wonderful thing about do-it-yourself, as a movement, is that it is a powerful way of creating more skilled technicians, lowering the cost of a repair. Also, because it’s fun, you’re realizing value that is difficult to capture in an economic analysis - conservation, thrift, self-reliance, and, if you’re doing a project with other people, community and social interaction. In this case, the repair was easily justified by the value of my time (low), and this is true in many other cases, too. But these reasons are why do-it-yourself is important culturally, not just from a purely monetary standpoint.