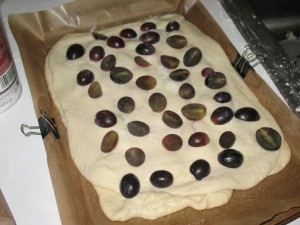 [caption id="attachment_529" align="alignleft" width="300" caption="Before. Yes, I use binder clips to hold my parchment paper in place. My kitchen is my office."][/caption] 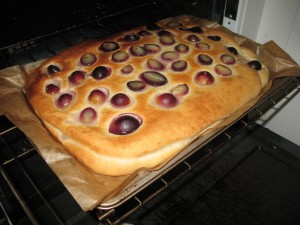 This grape bread(formally: “Schiacchiata con L’Uva”) was a side dish to a larger meal I made, but it is so awesome that I think it deserves its own entry.

This is essentially a focaccia with grapes. I don’t remember where I read this, but apparently this is a traditional Tuscan bread that is meant to use up some of the grapes left over from the harvest (?).“Schiacciata” means “flattened” in Italian. Why is this name applied to this bread? Because it’s a flatbread, I guess. (“Focaccia”, on the other hand, comes from the Latin “focus”, which means “hearth”, so it’s “hearth bread”. The “hearth” meaning of “focus” was apparently generalized over time in English to get its meaning of “center of activity”.)

Because the recipe calls for rather a lot of sugar, I was worried that it would end up as a dessert bread, so I halved the grapes and sugar in my recipe. Came out awesome. Extremely moist, and the grapes give it a little bit of sweetness and tartness.

It remained moist for almost a week after I made it. I think the honey helps with that, since honey is hygroscopic - it draws moisture from the air. Definitely an appropriate dinner bread, though I don’t know exactly what I should have served it with.

This is only the second time that I have successfully worked with yeast. I learned a couple of things. Number one, proofing the yeast, by letting it sit in a glass with warm water and sugar, is important. Once it’s been sitting there about 5 minutes, you’ll get bubbles and a nice yeasty smell that proves it’s alive. Number two, when allowing the bread to rise before you put it in the oven, it has to be in a warm place. Not a room-temperature place. Somewhere warm. Like over (not in) a heated oven. This cost me a couple of hours!

I think this would have been good with some rosemary in it. I think it would even have been delicious if I had left the grapes and sugar out completely (little bland, maybe). The basic recipe would be a great base for lots of other kinds of flavored breads, such as this caramelized onion schiacchiata…