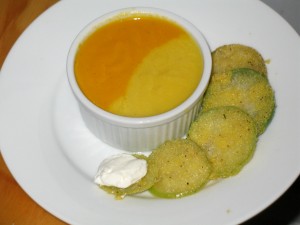 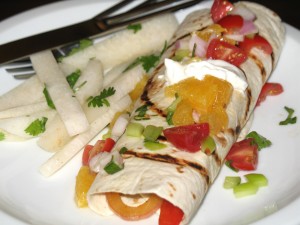 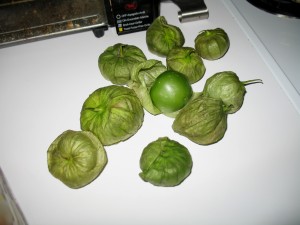 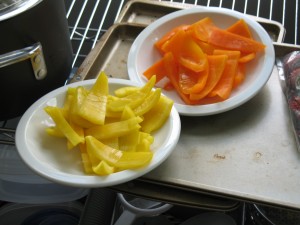 [caption id="attachment_636" align="alignleft" width="300" caption="Peppers, ready for simmering. Note that the waxy membrane has been removed."][/caption] 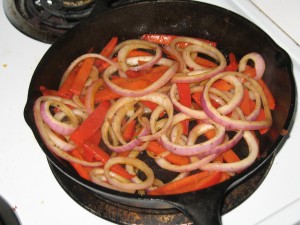 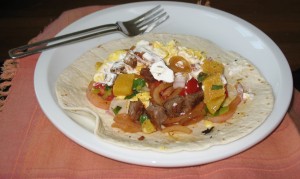 Recently I cooked probably my most complex meal yet. The first course was a harlequin pepper soup with a slide of fried tomatillos. For the main, I made fajitas together with an orange salsa, and sliced jicama. Finally, for dessert I made ice cream! (Strawberry ice cream, and basil-lime sorbet, which I talk about in detail here). Let’s take each piece by itself:

One of the very first things I ever seriously cooked was a “harlequin soup”, half tomato and half yellow pepper. What is a harlequin soup? Check out this link for an example. You make 2 separate soups, with similar consistency. If you pour them simultaneously into the opposite ends of a bowl, the soups will not mix, and you get a beautiful color effect. (You could probably do this with more than 2 soups, but they all need to be poured simultaneously).

Normally you do this in order to serve 2 separate soups simultaneously. However, I decided to make 2 soups that tasted exactly the same, using 2 different colors of pepper in this recipe.

Since I essentially had to make this recipe twice, each one with a tiny quantity of peppers and half the normal ingredients, it took forever. But I think sometimes it’s worth it to do something complicated if the result is especially beautiful. (Whether this is one of those times I leave to you to judge).

Together with the soup, I served this fried green tomatillo recipe. I wanted to make normal fried green tomatoes, but couldn’t find them locally. Tomatillos were a great substitute, and they went well with the main course since they were fried in cornmeal.

One note about frying these: you really shouldn’t do it for very long. If they start losing their color, it’s too long. Slight tenderness is desirable; anything more than that quickly become sogginess. Another note: this was the day I finally learned about smoke points.

Fajitas are delicious. They also use a relatively cheap cut of meat, which is great (I talk more about that here). I used Tyler Florence’s “Ultimate” recipe - these are usually pretty reliable. The mojo (marinade) he proposes is also ridiculously delicious, being composed mostly of pureed chipotle peppers in adobo sauce. Check out the Wikipedia article for adobo to see what I was dealing with.

Preparing the ingredients for the fajita was interesting. I needed to grill quite a bit of meat, though I do not have an outdoor grill. I used my cast iron pan, and I must say thank our dinner guests for being extremely game; the apartment quickly filled up with thin smoke and we all coughed heavily for about 20 minutes. Still, it was worth it in deliciousness. The peppers and onions took another couple of minutes. Finally, I grilled each tortilla on an electric burner for about thirty seconds.

The sides were fairly simple. I used the clementine salsa from this recipe (substituting oranges), and I also cut up some jicama, which I tossed with cilantro and a couple of other ingredients. Jicama, for any readers who don’t know, is also known as “Mexican potato”, and tastes mostly that way. It is, however, usually eaten raw.

For dessert - ice cream! Again, I’ll refer you to that entry for more. Oh, and the next morning my fiancee cooked up some of the leftover fajita ingredients with sour cream and eggs for breakfast. Most delicious breakfast I’ve had in quite a while.