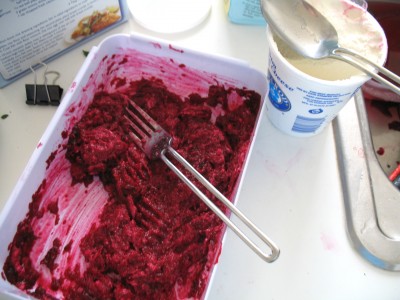 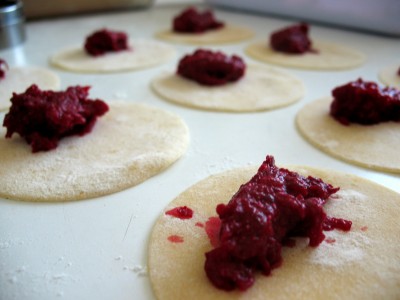 [caption id="attachment_1238" align="alignleft" width="400" caption="You put the filling on half of each dough round, and then fold it over."][/caption] 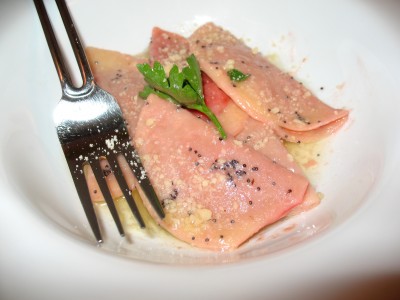 A couple of years ago, when I was first starting to cook, I tried to make some pasta and failed, perhaps not spectacularly, but thoroughly. I may have set my sights a bit too high - I began with the legendary uova da raviolo, which are giant ravioli with a whole egg yolk inside. While the egg yolks maintained a satisfying gooeyness, the dough surrounding them was far too thick and therefore undercooked and almost impossible to cut with any ease.

These were moderately delicious, though quite tedious to make. First you make the pasta dough, which is basically a combination of 2 eggs and about 1.5 cups of flour. Since there’s so little liquid, this has to be processed thoroughly to get everything to meld; I still added a little extra water. I’ll write a separate entry on this later, but after the dough rests, it’s rolled very thoroughly - you need to get it down to 1⁄16”, which takes time, and then cut into rounds.

This is a strange way to make ravioli, since normally what you’d do is take a sheet of dough, space out filling on it, then layer another sheet of dough on top. After pressing down the edges, you cut out each (round) raviolo. Done. Much, much faster than the method that this recipe calls for. Sadly, I only learned of this after getting 30 or so rounds done.

The filling is mostly beets, with some nutmeg and ricotta added, the rounds are then folded over the filling and sealed with water. I like to let them dry a bit afterward, though I don’t know if this is strictly necessary.

Finally, they’re cooked for a few minutes, and sauteed in a sauce of butter and poppy seeds. They look like little watermelons!

While I’m really happy I went to the trouble of making this recipe, since I can now say I know how to make fresh pasta, it wasn’t that fun to eat. There’s something about the filling that lacks intensity - I think beets can have a very strong flavor, but they need another ingredient to bring that out, which ricotta is not. As a result, you sort of get two slightly watery ingredients in the filling. The poppyseeds are an interesting addition, but their flavor is actually too strong without the right beet notes.