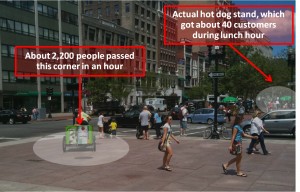 I have always been interested in whether hot dog stands are a profitable business. Seems like it would be hard work to run one, but relatively easy to set up. Plus, I imagined, they must be fairly profitable on the basis of food alone - $4 or $5 is not uncommon for a dog and a soda, but the ingredients must cost much less than that.

I was amazed by the resources already out there for this. This Journal article from 2009 discusses an upsurge in interest in these carts as a side business (and this followup, from the same edition, gives instructions). In my research I found several companies like this one that make money by connecting people interested in vending to the necessary resources and advice, or like this one, “Hot Dog University”.

In addition to reading these guides, I also undertook my own (very cursory) research to understand how hot dog stands work economically, specifically:

Let’s assume that a vendor only sells sodas and hot dogs / sausages, and that every customer buys a dog and a soda. (As I will say repeatedly, I realize these are gross oversimplifications, but I just wanted to get a sense of how the business works.)

I checked out some local supermarkets to price all this out. You can get:

There are tons of refinements you could make to this pricing structure. For example, the supplies are probably cheaper in bulk, but on the other hand you would have to be very careful about inventory control because of spoilage. I’ve left out incidental costs, such as condiments, fuel (to run burners etc.), ice, napkins, and transporting the inventory and cart around.

The next key question is how many dogs a vendor might sell. To get a sense of this, I staked out downtown Boston around lunch hour. I first spent a half-hour counting how many people bought from a hot dog stand across the street (its prices, by the way, were in line with the expected prices I quoted above).

Again, I made many simplifying assumptions here. Most importantly, I didn’t check to see whether each customer of the stand across the street bought a dog and a soda - most seemed to, but many could have bought more or less.

I don’t have a way of determining whether this particular corner was typical, although I think it seemed typical for a corner where hot dogs could be sold. I also have no idea how reliable my assumptions about traffic are. For all I know lunch is a hot dog vendors slow hour! (Though this is unlikely.)

Does this seem like a reasonable appraisal of hot dog revenue? Maybe. As reluctant as I am to admit that I could be making six figures as a hot dog vendor, perhaps I should come to terms with that possibility. Perhaps on further refining this model I would find that that’s not the case.

There are, however, waiting lists for permits (e.g. in New York), and a lot of the downtown areas are saturated with mobile food vendors. Maybe this kind of return potential explains why. It also seems like the critical factor within one’s control is customer volume, which in turn depends largely on location, which in turns depends on waiting for a spot to open up, or getting a lucky break.