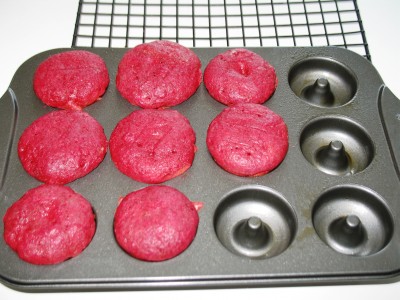 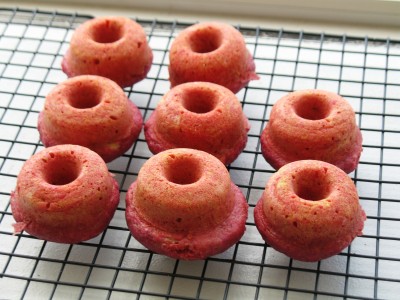 [caption id="attachment_1410" align="alignleft" width="400" caption="...donuts on the bottom. The donuffins' color changes from yellow on the bottom of the donut side, to magenta on the muffin top. My theory is that the donut side gets hotter in the oven (since it is face-down), so relatively more of the molecules responsible for beets' red pigment (betacyanin) are deactivated on that side."][/caption] 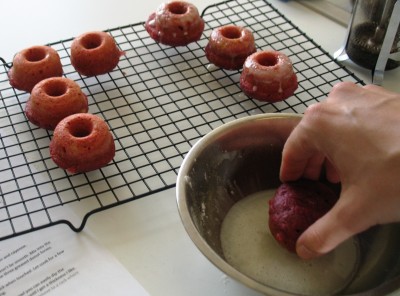 [caption id="attachment_1411" align="alignleft" width="400" caption="Glazing. The donut side is dipped into a mixture of a little milk and a huge amount of powdered sugar."][/caption] 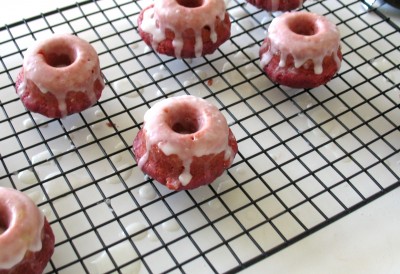 [caption id="attachment_1412" align="alignleft" width="400" caption="When the glaze dries, it forms a crunchy shell. One big advantage to the donuffin form factor: it captures glaze that would otherwise be lost through the middle."][/caption]

If you’ve been reading this blog for any length of time, you know that I love beets. I especially like to use them in unexpected ways, as in e.g. this beet jam, or these beet chocolate and spice cakes.

No matter where you use them, the color of the resulting dish is guaranteed to be beautiful, and you will probably get at least some credit for using an ingredient that most people either never eat or don’t like. And they work pretty well in cakes, since they have a subtle richness that people can’t often tease apart from the main dessert flavor.

The origin of the donuffin

****So when I saw this beet donut recipe, I was interested. Also, I’ve been meaning to try donuts for a long time, so this seemed like a good opportunity to cross that off my list. It’s a fairly typical cake donut recipe, with some beets thrown into the batter, so not too much to say there. The glaze is made with a little bit of milk and a lot of condensed sugar, which forms a crunchy, sweet coating when it’s applied to a donut and then left to dry.

Except. I bought a mini-donut pan for this recipe, and I have never used one before. I clearly put in too much batter, since when I took the donuts out at the end of their 11-minute baking time, they had aggressively overflowed the donut molds. They were still tasty, but they spread out just like muffins or cupcakes on the top, while they retained a donut shape on the bottom.

Oh well. Some of the greatest desserts in the world were created by accident. All you have to do is give your failure a name; I christen these donuffins. Still delicious.

Theories about the color

The color is particularly interesting as well, and quite beautiful as usual. In this case, however, there is a gradient from yellow to magenta, with magenta gaining in intensity on the muffin side.

Normally, there is far more betacyanin in a red beet, which means that the magenta color dominates. (In yellow beets, betaxanthin dominates.) But in this case, the betacyanin appears to have decreased in concentration in the donut half of the donuffin.

I think this is probably because the donut half of the donuffin was face down in the oven (i.e. in the pan, facing the heating element). Either betacyanin is deactivated more quickly than betaxanthin in response to heat, or the concentration of betacyanin was reduced more, or its absence is more apparent, simply because it was more highly concentrated in the first place. (Though I’m not sure this latter theory makes sense, entirely).

Here’s a quick etymology lesson, by the way, on how these names came about: