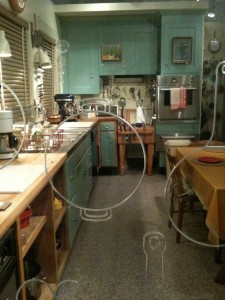 [caption id="attachment_603" align="alignleft" width="225" caption="Left counter. Note in the background the blue KitchenAid mixer, which she endorsed enthusiastically in an accompanying video."][/caption] 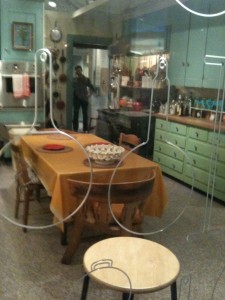 [caption id="attachment_602" align="alignleft" width="225" caption="Right counter and kitchen table. The outlines are places where particular pots and pans go (you are looking through that wall). To the right of this is a bookshelf."][/caption]

I think kitchen organization is a fairly interesting topic.

For example, I was recently able to sit right in front of the griddle at a diner the other day. Here is a space about six feet square where a smart cook, together with an assistant and a well-thought-out mise-en-place, can quickly and efficiently assemble food for an entire diner.

The cook had places on the griddle for different types of foods (eggs, pancakes, sausages, burgers) and fully understood the timing of the various recipes, with the result that he could deliver many high-quality meals in very short periods of time.

As a simple example, he would put a bunch of sausages down, then start some toast, then at the last minute crack six eggs. As soon as the sausages had developed a nice burn, the toast popped out of the toaster and the eggs finished cooking through. Everything could be immediately transferred to a clean plate and brought out into the dining room. And, by the way, everything went in a place with particular heat levels suited to the task at hand (long cooking, quick searing, etc.)

This is a very simple example of the multitasking that chefs everywhere do constantly - up to the level of a table of many guests, where each has a complex and unique order - so that the chef doesn’t waste any time and so that food comes out at the optimal temperature, and not overcooked or undercooked. In general, this creates a lot of complex logistical problems, many of which we solve without noticing.

So, on this theme, I enjoyed seeing Julia Child’s kitchen at the Smithsonian today. Here’s somebody who cooked all the time and therefore had to deal with a lot of small logistical challenges (and also organizational challenges, given the variety of dishes Child likely prepared). But - she had a surprisingly modestly appointed kitchen.

Here are some specific things that I noticed. First of all, Child had lots of different surfaces. This is really important. She had space next to the stove for hot pans, a butcher block for cutting meat, space next to the sink for dirty dishes and probably other purposes, and plenty of additional space elsewhere for things like cutting vegetables, rolling dough, etc.

Child stored many of her cooking implements - and she had a lot - directly above her stove. Many of her other tools, as well as pots and pans, were stored on pegboards, which reminded me of the way tools are often stored in garages. There were also outlines on the wall of the various pots and pans, to make it easy to put everything back in its proper place.

One thing that really surprised me, as I mentioned briefly above, was how modest the kitchen was. It had no props. The shiniest thing was the blue KitchenAid stand mixer, which Child discussed in some detail in the videos accompanying the exhibit. She said that she saved up for this particular mixer because of its quality. She recommended that until you are ready to buy a mixer like this, you use a hand mixer and keep saving your pennies. This sounds right to me.

As another example, some of the exhibition notes talked about her stove, which was manufactured sometime in the first half of the 20th century if I recall correctly. It apparently never needed repairs despite heavy and constant use. Child said she wanted to be buried with it, if a plot could be found big enough for her and the stove, and she apparently brought it from house to house and - at least once - across the Atlantic.

This was Child’s _ninth _kitchen, which means, I assume, that she arrived at its organizational scheme after developing a deep understanding of how she could work most efficiently. I should also note Child was 6’2”, which probably meant she faced unique ergonomic challenges as well.