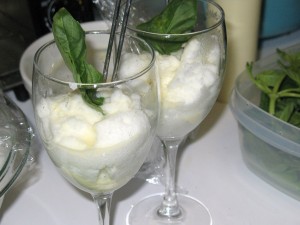 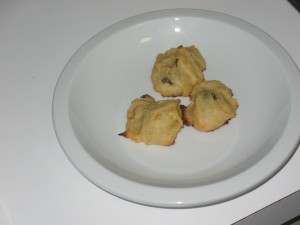 [caption id="attachment_534" align="alignleft" width="300" caption="Cookies made with the leftover custard."][/caption]

Together with this dinner, I also made this lemon pudding with basil custard sauce. To make the pudding, a mixture of gelatin, water and lemon zest is added to a meringue (egg white foam).

The result is hardly what I’d think of as a pudding - it’s very light and airy, almost like a lemon Italian ice without the ice crystals, if you can imagine that.

To this is added a basil custard sauce. To make the sauce, the recipe says to bring milk carefully to a boil, without letting it boil over, and then add plenty of basil leaves to steep in it as it cools. Once the milk has cooled, you can remove the basil leaves and heat the milk again.

Finally, you add several egg yolks, which help to thicken the final sauce.

Egg yolks are interesting to work with in conjunction with hot liquids. Typically the proteins in eggs coagulate at high temperatures, and this coagulation gives you scrambled eggs (for example). Even in a simple fried egg, the solidification and opacification of the yolk results from the coagulation of the egg (white) proteins. This is my understanding, anyway.

But when you’re making a custard, you don’t want coagulation. That would give you a custard base plus scrambled eggs. You avoid this by tempering the yolks, which means that you mix them together with a small part of the hot liquid to raise their temperature, then mix that mixture back into the larger batch of liquid. Doing so causes the eggs to heat up more slowly, which for some reason prevents them from coagulating. (I haven’t been able to find a satisfactory explanation of why, yet).

Once the custard is made, you simply pour the basil custard sauce (also known as a creme anglaise) over the pudding. It’s a really interesting and extremely refreshing combination. It’s best served with a basil leaf for garnish - see above photo - and some berries, e.g. raspberries or blueberries. I originally made the pudding in a giant dish but next time I’ll pour it directly into wine glasses to set.

We got through the pudding pretty quickly, but there was a lot of custard left over. To try to use it up, I just added a huge amount of flour and made cookies out of it. They tasted OK, but the texture was really off.

I don’t know if that was primarily because my oven freaked out - it often goes to 500 degrees for no apparent reason, which forced me to pull the cookies out immediately - or whether it was because there is something wrong with the recipe I improvised.