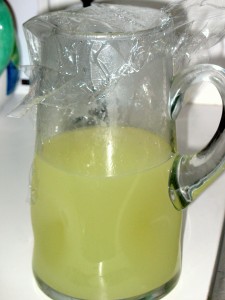 I had a bunch of leftover lemons from a recent party, and no ideas about what to do with them. Then, suddenly, the weather got nice - lemonade! (I also made some chocolate chip cookies with frozen dough from this recipe, but they burned horribly and so I had to throw them out).

It was great! I used about 4 cups of water, a half-cup of sugar, and a little salt. I’ve never really thought about what lemonade tastes like before, so I’m not sure how it compares to lemonade that most people would consider “good”. I like strong flavors, so probably my lemonade was more tart than most.

It would be interesting to look more into lemonade and see who prefers what flavors - there are probably tons of variations.