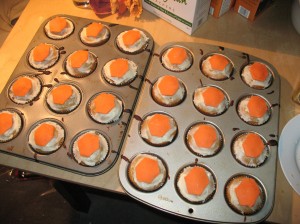 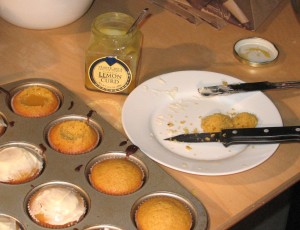 [caption id="attachment_1013" align="alignleft" width="300" caption="Filling the cupcakes with lemon curd. You can see I've cut a cone-shaped piece out of the top of each cupcake, which the curd goes into. The top is replaced, and the cupcake is iced."][/caption] 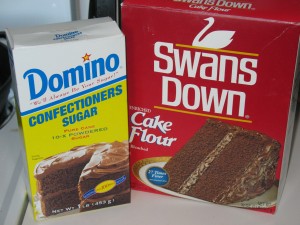 [caption id="attachment_1016" align="alignleft" width="300" caption="Confectioners' sugar and cake flour. Both boxes have the same freaking cake on them! In fact, I think the slice on the Swan's Down box may have been taken from the cake on the Domino's box! This, for some reason, is why I confused them."][/caption] 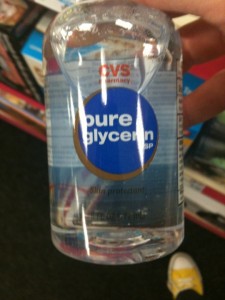 [caption id="attachment_1015" align="alignleft" width="225" caption="You may have a hard time finding this. But you definitely need it. Check the skin care aisle."][/caption]

A couple months ago, I got accepted to a group called Hive 76, which is kind of the local nexus for people who are interested in DIY 3D printing and lots of other cool things as well. To celebrate actually being accepted, I thought I’d bring some cupcakes to their Open House.

The cupcake batter was basic red velvet batter, which has a sort of savoryish taste that I really like. It’s easy to fill cupcakes - you just cut a cone out of the top, add your filling, then put the top of the cupcake back on. So I figured I’d put some lemon curd in as well, since it’s really cheap at Trader Joe’s, tastes great, and helps counteract the dryness that sometimes happens when I make baked goods in my oven.

(I learned a very helpful piece of information about baking in relation to this, by the way - when you are doing the toothpick test, you only need to push the toothpick about halfway through whatever you’re baking. Only halfway! This makes a lot of sense, since what you’re checking is that the inside of the cake is done cooking. Pushing the toothpick through the cake should theoretically work, I guess, since the outer layers of the cake shouldn’t leave any residue on a toothpick if the inner layers don’t. However, it doesn’t seem to work this way in practice, so my cakes always ended up overdone. Good to know.)

Anyway, on top of each cupcake I decided to put a hexagon made of orange fondant, since that is the Hive76 logo - thought this would be an interesting excuse to actually make some fondant. I have to say, a lot of my cooking is actually motivated by curiosity as to how something is made, or a desire to make something, rather than the eating part. Though that is good too.

Making fondant is very similar to making dough, except that every time you’d want to put in a normal ingredient, you put in something sugary instead. Instead of flour, use powdered sugar. Instead of eggs, use glycerin.  One huge mistake I made on the first run was using cake flour instead of powdered sugar - the boxes are virtually identical! I kind of wish I had finished with that recipe, though… would have been interesting to see what happened.

Overall, it’s not that difficult to do, and I was able to finish the fondant without too much trouble (though it does require a hell of a lot of food coloring). One important piece of information is that if you are ever looking for glycerin - and you will be looking for it if you make fondant - you have to go to a pharmacy to get it. Once you’re at the pharmacy, check the skin care aisle.

Why skin care? Glycerin is used primarily as a remedy for chapped lips. This means its safe to eat, and I guess its moistening properties are part of why it’s an essential component of fondant.