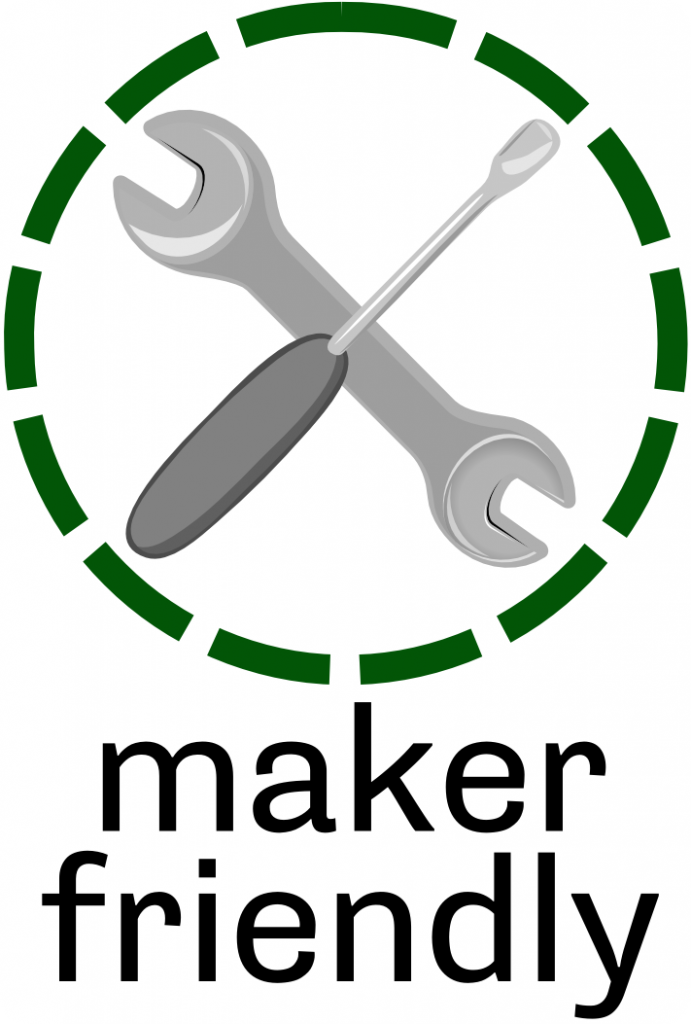 [caption id="attachment_1715" align="alignleft" width="299" caption="A possible "maker-friendly" badge, public domain. A link to the .svg is at the end of this post."][/caption]

In Mark Frauenfelder’s _Made by Hand_, he talks about modifying his coffee machine (among other projects). He’s able to do this because the coffee machine happens to be easy to repair as a byproduct of its commercial construction.

Think about your microwave or mobile phone, on the other hand. How easy would they be to repair, if you needed to? Very difficult - in fact, stickers on many appliances note that there are “no user-serviceable parts inside”. If you have an iPhone, you’ll notice that it uses special, rare screws that it’s difficult to find a screwdriver for. Even the battery is encased within the phone and impossible to replace without serious intervention.

Why things are hard to take apart

There are some legitimate reasons for this. Microwaves, for example, probably discourage users from fiddling around with them for product liability reasons - if a user tries to repair their microwave and injures themselves, a small appliance manufacturer wants to be able to say that they told you not to mess with it. For the iPhone, there may be some good reasons having to do with branding - Apple has made its name by creating magical devices that users don’t have to intimately understand to use. Apple products are known as tools, not machines.

But there are also lots of reasons why you should be able to take apart, and perhaps then modify, the things you buy.

In volume 3 of MAKE Magazine, Dale Dougherty talked about (coined?) the term “maker-friendly”. “Maker-friendly” products are ones that can be disassembled with relatively little effort. Their construction is easy to understand, and therefore possible to modify. (For “maker”, you could also read “hacker” here, for the correct meanings of “hacker” - “hacker-friendly”).

In the next volume, MAKE published a Maker’s Bill of Rights, which you can see here. I’ll select a few that are most interesting to me; there are 17 rights proposed at the link.

The idea of “profiting by selling expensive special tools” is interesting. I guess I wonder with maker-friendliness - why do manufacturers want to do this? Right now the consumer pays twice: once upfront for the actual product, and then, on average, a little extra when they need it repaired. Will consumers pay extra upfront for “maker-friendly” designs where, for example, HP doesn’t make money off proprietary power adapters?

The fourth bullet, the idea of ease of repair as a design ideal, is a possible counter to this. If things are easy to repair, perhaps they are easier or cheaper to manufacture?  Or perhaps they have a higher value on the secondary market, and therefore are slightly more valuable upfront? On the other hand, is maker-friendliness in contradiction to the idea of user-friendliness (ease of use and operation)?

There is also a branding component to this. I wonder if maker-friendliness, or some variant or related theme, could be to technology what organic growing methods are to food. Would you pay a bit extra for something that you knew you really owned and could take apart easily, even if perhaps the benefits weren’t totally apparent right away?

I thought it would be interesting to think about how you can designate maker-friendliness in a product in a way that’s easily discernible to consumers, so I came up with this seal (which I obviously am releasing to the public domain - it is based on some of the work at openclipart.org). Here is the .svg. I put my name on it, but obviously you can remove that, make whatever modifications you’d like (or not!), and promulgate it.

Is “maker-friendliness” something you’d pay extra for, either as an actual feature or as something you generally support but may or may not use? Is this something consumers at large might care about yet, or ever?