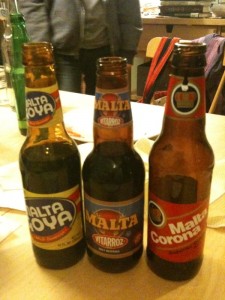 A few days ago, I was given the opportunity to try this delicious beverage called “malta”.

As the label says, it’s a malt beverage. From its taste, it seems to be made from malted barley specifically, and there’s water and hops in there.

Yup, it’s beer. But it says “soft drink” on the label! So, it’s nonalcoholic beer, beer that hasn’t been allowed to ferment. It’s much sweeter and somewhat more carbonated, too. It’s basically beer soda.

It reminded me of when I was a kid and I’d drink Ovaltine with Rice Krispies. Starchy, sweet, malty.

It’s also strangely addictive. The first few sips were pretty enjoyable. After that I found myself basically unable to stop drinking it, even after it started to make me a little ill. I managed to stop after just one bottle, thank god (the one on the right). Part of what drew me to it is that it felt weirdly nutritious to drink…