Mesh networking is an exciting idea (quick explainer below if you’ve never heard of it), the technology (largely) exists to do it, and there are some pretty clear use cases related to routing around entrenched internet gatekeepers (whether they are governmental or private).

Perhaps most importantly, the idea of mesh networking seems to be a fit with our current trend toward decentralization, where there’s money to be made in providing infrastructure for peer-to-peer networks, rather than for providing services directly. Think of Uber, Airbnb, or Bitcoin.

And yet this Google Trends graph shows declining interest in mesh networking. Why? 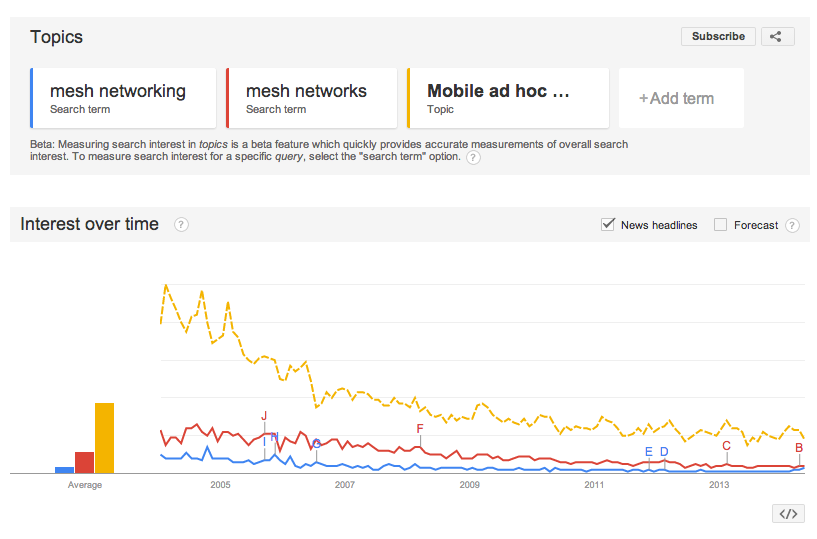 As a quick recap, connectivity over a mesh network is like a grid of streets as opposed to a single interstate highway.

If you’re on a mesh network, a request from your phone can go to a cellular tower as it normally would. Or, the request goes to someone else’s phone nearby, and that person’s phone then gets the data from a cellular tower. Or, through some other device or chain of devices. Advantages include:

Of course, the technical problems of building a network that can heal, adjust and optimize itself in real-time are enormous, though many of these challenges are already being addressed.

There are a couple of recent-ish developments, too. Apple released the Multipeer Connectivity Framework in iOS 7. Though limited in its application so far, it essentially allows iDevices to create their own mesh networks. (Android doesn’t appear to have an equivalent, though I’m not sure).

The most popular application using that capability right now is FireChat. The company that makes FireChat has also released Open Garden, which is a mesh networking tool for desktop devices. Fred Wilson loved it (in 2012).

It seems as if there a few ways that mesh networking could get popular:

I haven’t spent much time thinking about the problem, but I wonder what other applications would benefit from mesh networking’s advantages enough such that they can get it introduced to the public consciousness.

Thanks for reading! Join the discussion on Hacker News. You may also want to follow me on Twitter.