[caption id="attachment_1286" align="alignleft" width="400" caption="Sitting in a bain-marie, waiting to be put in the oven. The batter is a mixture of carrots, milk, orange juice, eggs and other flavoring ingredients"][/caption] 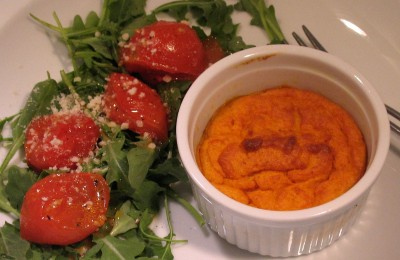 [caption id="attachment_1294" align="alignleft" width="400" caption="Served with a simple arugula salad with roasted tomatoes on the side."][/caption]

I had a bunch of carrots left over from another recipe, and I also have been waiting to make another soufflé for quite a long time. So I decided to make this tasty-looking carrot soufflé recipe. Only problem - not nearly enough carrots, as it turned out! So I decided to make miniature soufflés.

They turned out pretty well. To a carrot purée is added milk, eggs, cinnamon and orange juice - all very typical carrot-complementary flavors, many of which are in the recipe I use for carrot-ginger soup as well.

Despite letting them cook for quite a long time, the soufflés actually did not rise or really set up properly. That was unfortunate, but they did develop a crunchy crust on top, and were smooth and rich on the inside, so were actually still tasty. It was kind of like eating a carrot pudding, and that texture, combined with the sweet flavor of the carrot and cinnamon  reminded me of a fall dessert.

I think the mistake may have been setting the soufflés up in a water bath (see first picture). The idea was to cause the soufflés to rise more evenly; I was especially worried about this given their small size. But the recipe doesn’t actually call for a water bath, and so I wonder if I may have upset the action of the baking powder or caused some other problem by putting them in one.

I needed something to serve them with, so I added some arugula, parmesan cheese, and cherry tomatoes roasted slightly too much - so that they became almost jammy - in olive oil.