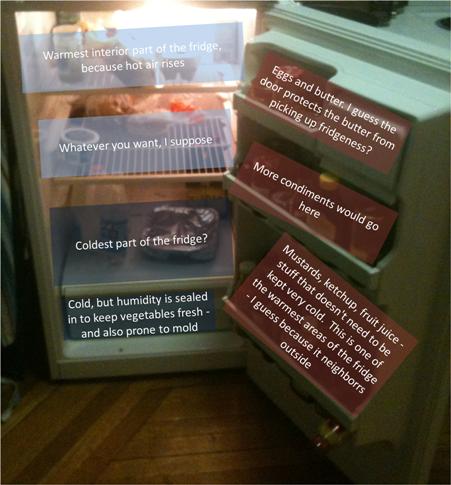 Inspired by this Wall Street Journal article, “Why Won’t Anyone Clean the Refrigerator?”, I decided to look a bit more into refrigerator organization.

I don’t care as much about the cleanliness aspect, by the way - the reason why nobody cleans the fridge is pretty simple, and I’m not convinced it actually poses some kind of health hazard as claimed in the article. I would welcome being instructed on this point if I’m wrong.

What interested me more were the comments about how there are apparently different zones in the refrigerator, as far as temperature and humidity go. Ever since the water bath experience with making miniature cheesecakes, I have learned to pay attention to effects that might seem pretty subtle. In that particular case, exposing the completed cakes to a warm water bath for just a few seconds made all the difference as far as getting them to slide out properly.

So, I thought, maybe there is something to these various zones in the refrigerator. I could see how keeping something a few degrees colder or warmer could help keep it fresher longer. Or how butter, for example, which actually doesn’t need to be refrigerated at all, could benefit from being kept in a warmer portion of the fridge so it’s more spreadable.

According to the WSJ article, several years ago a major refrigerator company did a study to see how people put away their groceries. The company bought each participants a week’s worth of groceries, and asked them to put the groceries away.

Their phrasing reminded me of Bill Murray’s warning to the mayor in Ghostbusters, which included the phrase “mass hysteria”. Nevertheless, they’re right. I have no idea how to organize my fridge. I’m not sure anybody does. I got lots of conflicting advice on the internet. The internet, people!

Here’s what I can tell so far. I guess you’re supposed to keep condiments and fruit juices - things that are not as sensitive to temperature changes - in the door. You’re not supposed to keep dairy there. That’s because this is the part of the refrigerator most vulnerable to warm air currents when you open the door to get something. If you’re keeping butter in the fridge, it seems like a good idea to put it in the doored compartment so it doesn’t pick up fridgeness.

In the main part of the fridge, the claim is that hot air rises, so the lowest shelves will be the coldest. Fair enough, although I found it hard to believe that there is enough hot air in the fridge after even a few minutes to make a difference. I wonder how much the temperature changes every time you open the door?

According to this video, which I got some additional information from, it’s bad to have a full fridge because this keeps cold air from circulating through everything. I found this perplexing.

I would think that, again, once things in the fridge are cool, they’re cool. A small differential in the air circulation shouldn’t make that much of a difference, since you’re not trying to wick away any additional heat. Also, one of the videos attached to that one implied that the refrigerator needs to be constantly cooling its contents. This doesn’t make any sense - the things in your fridge aren’t generating heat. My understanding is that a coat, for example, works for humans because it helps keep body heat from escaping. In a fridge, once you’ve done the work of cooling the air and have closed the door, I can’t see why there would be further temperature change.

One very interesting thing I learned about while doing this research is that you can buy special containers for your vegetables etc. that give them proper venting and also allow moisture to escape. Apparently, the crisper drawer doesn’t do this very well - I can see how that would happen. These containers are pretty cheap, so I ordered a few to experiment with.

Below is a rough diagram I’ve put together with what I understand. Not much. I wonder how much of this is real, and how much is marketing. I wonder that a lot about food. This is when blind taste tests come in handy.